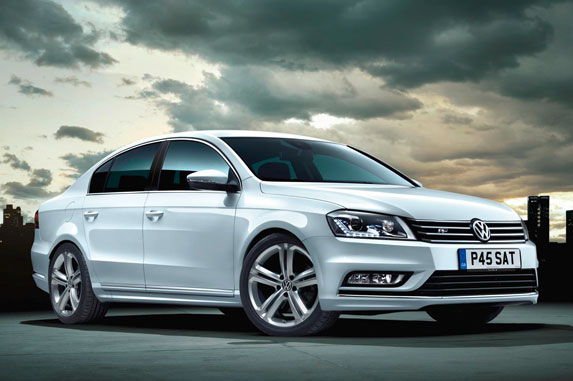 The Volkswagen Passat R Line was introduced as a sportier, more stylish addition to the range.

For the same price as the Passat Highline, the R Line also rides 15mm lower than the more comfort-oriented models.

These items give the R Line more kerbside appeal and make it stand out more against some of its newer rivals.

The sporty additions do come at some cost, however; it has manual air conditioning instead of the Highline’s automatic climate control, and no standard satellite navigation.

This petrol version of the Passat would be an unusual model on a company car fleet, but we keep hearing that advances in petrol technology could lure some drivers away from diesel, although Volkswagen says hasn’t seen any evidence of this yet.

It means you don’t have to work the six-speed manual gearbox too hard to exploit the car’s performance, which feels all the more remarkable given the size of the engine.

But with CO2 emissions of 144g/km compared with 119g/km for the TDI and fuel consumption of 45.6mpg instead of 61.4mpg we still think most fleet customers and company car drivers would favour the diesel.

The engine note is unobtrusive, and there’s a nice, linear power delivery even if it lacks a little of the mid-range punch of the diesel.

The ride certainly feels firmer than the Highline model, but the R Line gives the driver a bit more confidence when cornering.

The R Line succeeds in giving the Passat a little more presence on the road by adding a more desirable model to the range and is likely to be the preferred choice of many drivers.

But according to our running costs data from KeeResources, the Highline versions would have a slightly higher residual value than the R Line, worth £375 more at four years/80,000 miles.

That would make the R Line model less desirable.

But Volkswagen also offers the R Line styling kit as an option pack on the Highline for £900 which, although more expensive, would seem to be a best-of-both-worlds alternative.