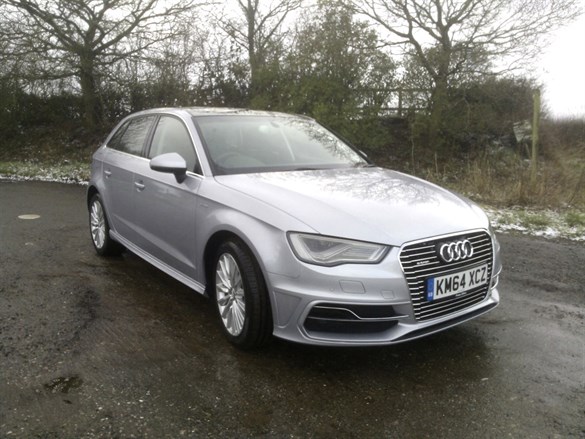 Just a glance at the performance data suggests  the latest model from Audi puts an interesting automotive spin on the old saying about having your cake and eating it.

Surely, all the thrills of rapid acceleration and a 137mph top speed aren’t possible at the same time as a super-miserly fuel-sipping of more than 176mpg?

They’re not, of course – and that’s the first thing to  understand when you take a closer look at the e-tron, the latest version of one of the most successful products in the  corporate sector.

According to official figures, this plug-in hybrid delivers the shoestring running costs that should delight fleet bean  counters, but real-world economy can prove to be a long way from results based on a test cycle involving one third  driving in hybrid mode and two thirds under electric power.

So it will be interesting to discover how the latest addition to our long-term test fleet fares in everyday driving  conditions far removed from private tracks and rolling road equipment.

A 1.4-litre petrol engine and an electric motor put more than 200bhp on tap, so the e-tron has a demeanour far removed from the general perception of hybrid transport. With the brio to go with its upmarket positioning, this car needs only a prod on the accelerator to underline its sporting credentials.

Four driving modes are on offer and the first provides up to 31 miles of zero-emissions travel at up to 80mph.

Two other programmes take care of battery charging (one reserving power and the other boosting the charge rate),  but the car drives much like any other Audi when left in  auto mode. This is the default mode for the car, which constantly switches between petrol and electric drive and which picks up bonus miles from energy collected during braking and on overrun.