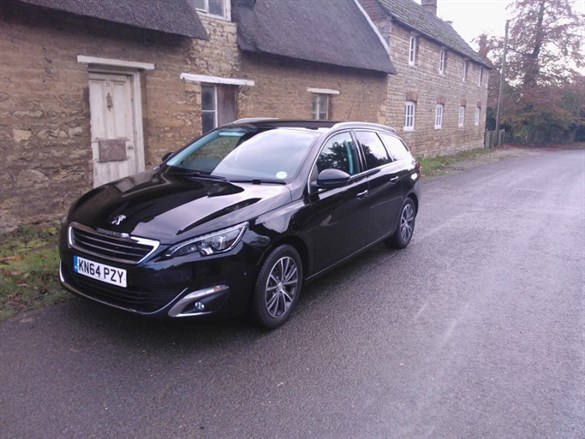 Our Peugeot 308 SW is trying to do more with less in two key areas. Firstly, a distinct lack of switchgear on the central console, with just the bare minimum on offer, including hazard lights.

All the traditional switches, and a few more additional functions, now reside in the excellent i-cockpit touchscreen, ranging from air conditioning to Bluetooth and satellite navigation. I had a particular concern about the lack of heater controls on the dashboard, but after 5,000 miles, I am convinced this has been a positive change.

Throughout winter, my first action when entering the car was to stab at the front and rear demister buttons, which shows keeping them separate was an inspired choice but, as for the actual heating controls within i-cockpit, I have barely looked at them after setting my ideal temperature.

The second area where the 308 does more with less is with the steering wheel. It is more compact and set lower down than in many rivals, so that you look over it at the instruments rather than through it. Many people are sceptical about this set-up, with some complaining that they can’t see the instruments properly, but that isn’t my experience.

The one significant flaw I have found in this ‘more for less’ approach is the humble cupholder. I can’t see the logic behind having only one in the front of the car. Unless a passenger wants to balance one on their lap, it has to be relegated to one of the cupholders in the rear.

I would also prefer more, rather than less, when it comes to fuel economy. Our test average of 57mpg isn’t to be dismissed, particularly as it includes short winter runs and heavy use of heater blowers. However, considering the 140kg weight reduction on its predecessor and the state-of-the-art 1.6-litre BlueHDi engine, I would ideally like to see figures that start with a six, considering the European test cycle indicates a combined cycle of 85.6mpg. But maybe it’s more to do with my driving style.