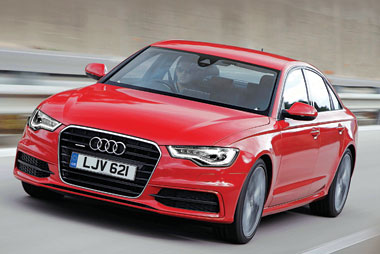 The level of excellence in the executive saloon sector can make it ever more difficult to choose based on ability alone.

Although the bulk of sales in this sector are four-cylinder diesel models, there is still strong demand for six-cylinder diesels among senior management, particularly as car manufacturers have worked so hard at achieving particular CO2 targets with them.

Last year the BMW 530d auto was launched and dipped below 161g/km – a key threshold for writing down allowances – and now the comparable V6 diesel version of the Audi A6 does even better, even with the added on-road security (and weight) of Quattro all-wheel drive.

Audi has made it a priority to ensure fuel consumption and CO2 emissions are competitive with rivals and has achieved this through using more lightweight materials than before in the A6, which has reduced overall weight compared with the previous version.

The S-tronic dual-clutch gearbox behaves like a smooth torque converter automatic most of the time, but as a manual gearbox does not carry the fuel consumption and CO2 emissions penalty that often afflicts conventional automatic transmissions.

With the cost of fuel increasing it would be understandable if a fleet operator gave greater weight to this aspect of running costs when compiling vehicle choice lists.

But the A6 is a polished product overall and it brings many new features to its sector, depending on how many boxes are ticked on the options list.

Customers can choose wi-fi connectivity, allowing the A6 to be used as a hub for passengers to connect to. It also allows news and weather information supplied by Google, and Google Earth navigation images.

A sophisticated lighting system can be adjusted automatically for beam length and spread depending on information on the road network supplied through the navigation system (for example spreading the beam wider when approaching junctions). There is also a range of other safety and equipment upgrades.

The refinement of the A6 is truly impressive, with near silence from the engine at steady speeds, while it is also more involving to drive than before, with much more steering feel.

In a sector where mediocrity is simply no longer tolerated, Audi’s V6 diesel A6 turns in an impressive all-round performance.

All cars are closely matched here, although the 2012 Jaguar XF will have the best specification, but all have the important kit as standard.

A6 is best in class for emissions and has the lowest BIK tax band. The 530d comes under the 161g/km threshold.

The new A6 comes out narrowly behind its German rivals on costs. Too early for XF calculations, but we think it will be a very close fourth.

A6 is competitive on leasing rates, but can’t match the E-Class. Jaguar figure is for pre-facelift model.
Lowest contract hire rates from www.comparecontracthire.com

The A6 is an impressive machine, but overall it still can’t quite match the 530d on costs, while the more mature E350 CDI, with the most powerful engine in our comparison group, also has a small advantage. The 5 Series would be our choice