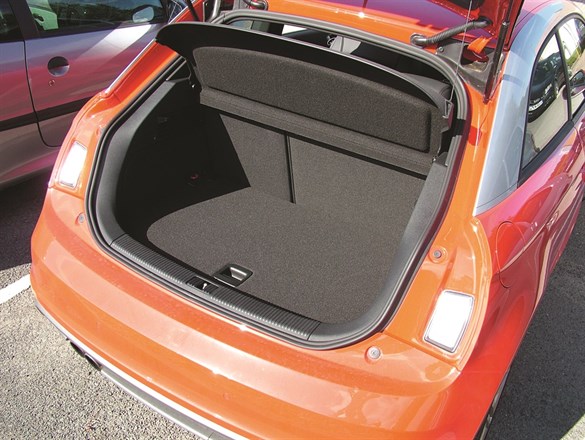 If a company car driver or fleet manager decides to opt for a smaller vehicle to save money one of the trade-offs is usually less interior space.

For a three-door small car, the Audi A1, however, fares pretty well on this front.

The boot space was put to the test during a recent trip to the airport. With the rear seats up a suitcase and rucksack swallowed up a fair chunk of the space. That’s fine for a single person but not so good if you have luggage for two people or more.

However, fold the split rear seats forward - which can be easily done via a few levers and takes seconds rather than minutes - and you get a flat loading area. The boot space increases from 270 litres to a generous 920 litres.

The Citroen DS3, meanwhile, has the edge over the A1. With the rear seats in place it offers another 15 litres over the A1 (285) and another 60 litres (980) with the seats down.
But what about space for rear passengers?

The DS3 trumps the A1 again as it can fit three passengers in the back while the A1 only has space for two adults.

However, when a 5ft 10 colleague put the rear seats to the test in the A1 he found there was plenty of legroom.

The coupe like roofline does cause a problem for headroom though.
At 5ft 2 the headroom is fine for me but my colleague found that his head was brushing the roof and he didn’t like the prospect of a long journey in the A1.

We also discovered that putting the front seat forward to allow someone to scramble into the back wasn’t as straightforward as it could have been.

The headrest of the driver’s seat skims the roof so you either have to put the headrest down or give the seat a decent push forwards.

There are no complaints about space up front though and the driver’s seat is one of the most comfortable I’ve been in.