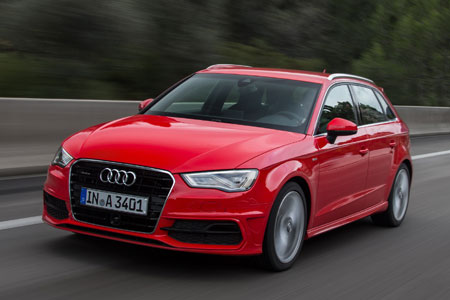 Audi is looking to further boost sales of its A3 range and provide an extra dose of practicality with the new Sportback.

The third-generation model has a lot to live up to as the outgoing car has proved particularly popular with both retail and fleet customers. Sportbacks account for two-thirds of all Audi A3 sales.

After its launch in March 2013, the new A3 Sportback will square up against its traditional foe the BMW 1 Series as well as fresh-faced rivals in the shape of the Mercedes-Benz A-Class and Volvo V40.

Unlike the A-Class, there is no radical styling departure from the outgoing model, as the new A3 Sportback is instantly recognisable. The few obvious changes from its predecessor include a more distinctive C-pillar and a new headlight design. Shorter front and rear overhangs give the car a sportier appearance.

The interior has received a more noticeable overhaul, with a new minimalist and simplified dashboard design, as well as the addition of an electric handbrake.

A longer wheelbase than its predecessor means the A3 Sportback offers more rear passenger space, while the boot increases in size to a class-leading 380 litres. It’s nearest rival is the Lexus CT with 375 litres.

Fuel consumption, too, throughout the range has improved, offering an average 10% gain over comparable outgoing models. Part of this is due to Audi’s focus on weight reduction which means the new Sportback is up to 90kg lighter than its predecessor.

Available in three trim levels, SE, Sport and S line, the A3 Sportback launches with a 2.0 TDI diesel engine and a choice of two petrols (1.4 TFSI and 1.8 TFSI).

Put through its paces during the test, the car handled impressively when cornering, and the engine is smooth and quiet.

The manufacturer’s Park Assist automatic parking system has been revised for the new model and some impressive technology, including Audi Connect, is given its debut.

Connect is Audi’s Bluetooth car phone which connects to the internet and is operated via the multi-media terminal, multi-function steering wheel or by voice control.

Among its functions are location search and text messaging by voice and Google Street View images of destinations.