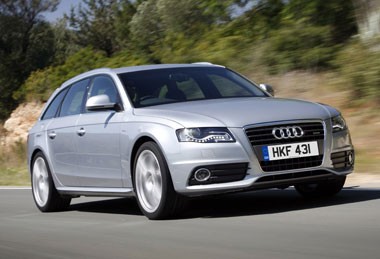 It seems like we’ve been completely obsessed with diesel for these part few years, believing it to be the only choice of fuel for a company car.

For those drivers covering mega-miles, it certainly is but with the rocketing cost of fuel, and the widening price gap between petrol and diesel, it’s worth looking again at what petrol models can offer.

Luckily, the major car manufacturers haven’t been as blind to petrol, developing new and impressive engines that combine driveability with frugality.

The Volkswagen Group is one, with its confusing range of TSI, FSI and T-FSI engines, all of which offer high power with decent economy.

And it is under the bonnet of the new A4 Avant 1.8T that a turbocharged FSI engine lives, using its lean burn fuel technology to offer 160bhp and combined fuel economy of 39.2mpg.

It’s an impressive unit, delivering smooth power across the rev range with little in the way of turbo lag from low revs.

With 160bhp, there’s enough power to make this an enjoyable car to drive, despite the extra size of the new Avant model.

Coupled with a revised chassis, this makes the A4 far more enjoyable to drive than before. It still lacks the outright driver appeal of a 3-Series, but it is much closer than before.

The steering rack has more weight and feel, and the six-speed manual gearbox shifts cleanly and precisely.

Only a slightly firm ride spoils things, although our test car was something of a hybrid model with SE trim but sports suspension. Having tried an S line version, the full SE spec is the one to go for if comfort is your main priority.

From the outside, the new A4 Avant much more closely resembles its A6 big brother than before, with a sloping rear hatch door to emphasis its sporty aspirations.

The result is 490 litres of boot space with the rear seats in place and 1,430 with them folded flat.

These figures are an increase of 50 and 76 litres respectively over the outgoing A4 Avant and sandwich the new version in between the BMW 3 Series Touring (460/1,385 litres) and the Mercedes-Benz C-Class estate (485/1,500 litres).

Elsewhere, it’s standard A4 – which means a pair of aggressive- looking headlights and the daytime running light strip to make sure the car is noticed in other road users’ rear view mirrors.

Inside, the Avant excels with its beautifully engineered and designed layout. The materials used are first-rate and feel good to the touch, while everything on the dashboard is logically sited.

And the MMI system remains the best of the current breed of integrated system controls, bettering BMW’s iDrive and the Mercedes-Benz system.

Audi sells a greater percentage of estate models than any of its premium rivals and with the new A4 Avant it’s easy to see why – the car blends performance, style, space and unmatched quality.

The three German models are entry-level specification, whereas the Honda is in fully loaded ES GT trim and looks good value at £2,000 less than the Audi. The Accord is the least powerful – 154bhp compared to 156 in the Mercedes-Benz, 160 in the A4 and 170 in the BMW.

With the acclaimed EfficientDynamics technology under the bonnet, the BMW 320i is easily the greenest and cheapest car here. It will cost a 40% taxpayer £135 a month in benefit-in-kind tax, compared with £155 for the Honda, £170 for the Audi and £171 for the Mercedes-Benz.

With variable service intervals and 16-inch wheels, the BMW and Mercedes-Benz are the cheapest in service, maintenance and repair over three years and 60,000 miles. The Audi is the most expensive, with 17-inch wheels and servicing needed between every 9,000 and 19,000 miles.

The BMW is the oldest in this group and is about to be superseded by a facelifted model, so doesn’t perform as well in RV terms. CAP estimates it will retain 38% of its cost new after three years/60,000 miles. The Honda and Mercedes-Benz will retain 39% but the Audi is well in front on 44%.

The Honda does not star in any area but puts in a solid performance across the board. Its much lower front-end price gives it an advantage. The BMW and Audi are closely matched but the Mercedes-Benz is outclassed, costing one pence per mile more than the A4.

First to be eliminated is the Mercedes-Benz – it costs too much to run and is expensive in terms of driver taxation. Also consigned to the losing camp is the BMW – the facelifted version will hopefully address some of its ungainly styling issues. That leaves the fully-specced Honda Accord or entry-level Audi A4. If common sense prevailed, the Honda would win – it has more kit, costs less to buy and run and is cheaper for driver tax. But the Honda badge doesn’t attract the same cachet as a premium brand. The new A4 Avant is a great all-round package and has that all-important brand appeal.