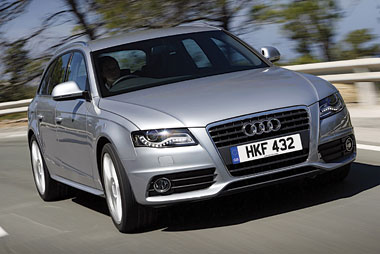 Like any company car driver, I’m not going to snub an opportunity to upgrade the equipment on a new car (unless it’s going to cost me a lot more money).

So it was with our new long-term Audi A4 estate (ok, Avant).

OK, so that’s hardly likely to bankrupt someone earning £37,400-plus, but what do you get for that extra cost?

A more powerful engine, of course, which is noticeable under acceleration (it’s a second quicker from 0-62mph) but all-out speed is tempered by the extra weight of the Quattro all-wheel drive system.

But while the Quattro blunts the straight line thrills, it is a huge benefit on handling, particularly in the wet.

The A4 Avant is sure footed even on the twistiest roads.

S Line also adds 18-inch alloys, part leather on the seats and a few other features, such as three-spoke steering wheel and matt-brushed aluminium inlays.

This can be unpleasant on rough surfaces, producing a choppy ride.

It’s still early days with the Avant but overall impressions are positive.

As an estate it has an ample, though not class leading, boot and it is effortless to drive on long distances.

I have a couple of quibbles.

The seats are not the most supportive over long journeys despite having multiple adjustment options.

And Audi has still not created a sat-nav system that recognises a full postcode.

Fuel efficiency so far is reasonable, averaging 44.1mpg against the official 51.4mpg figure.

A leisurely motorway stroll returned north of 46mpg; I expect to nudge 50mpg with a bit more effort.