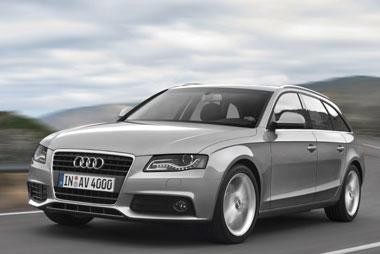 It’s fair to say that Audi as a brand has numerous strings to its bow – strong RVs, fantastic interior build quality, a strong motorsport heritage and a position as one of the most coveted premium brands in the UK.

But there is one thing it does even better than this list, and that’s estates.

No other premium brand enjoys such strong success as Audi’s Avant range, combining all of the saloons’ attributes with even classier styling and increased (and more useable) boot space.

And the latest addition to the family shows every sign of continuing that success.

The A4 Avant, which is available to order now with deliveries beginning in June, takes the underpinnings of the recently launched A4 saloon and grafts on a new rear end.

The result is 490 litres of boot space with the rear seats in place and 1,430 with them folded flat.

These figures are an increase of 50 and 76 litres respectively over the out-going A4 Avant, and sandwich the new version in between the BMW 3 Series Touring (460/1,385 litres) and the new Mercedes-Benz C-Class estate (485/1,500 litres).

Audi expects the new Avant to account for 45% of A4 sales – compared to around a quarter of sales for the BMW and Mercedes-Benz estates.

Audi expects fleet sales to reach nearly 60% – testimony not only to the brand’s appeal but also its strong wholelife cost proposition to companies thanks to its higher residuals than models from more volume manufacturers.

Iain Carmichael, head of fleet sales at Audi UK, said: “As the best selling premium estate car within the fleet market, the A4 Avant should continue to contribute significantly to Audi’s leadership of the premium fleet sales sector.

"We are sure the A4 Avant offers a complete package for the corporate market.”

In common with the saloon, the new Avant brings extra space inside for front and rear passengers – a criticism of the out-going models – and also brings in user-friendly touches such as the option of a powered tailgate and luggage nets and tie-down straps, plus the securing belt system first seen on the larger A6 Avant.

Initially the Avant will be available in SE or S line trim levels – the latter adding a more muscular bodykit and more sporting touches inside such as red stitching on the steering wheel and gearknob.

Front-wheel drive and quattro all-wheel drive are available, as is the choice of manual or two automatic gearboxes – Tiptronic or Multitronic.

It won’t come as a huge surprise when I tell you that the new A4 Avant drives very similarly to the new A4 saloon. In fact, there’s no difference at all.

Audi has responded to criticism of its cars as not being very exciting to drive, firstly with the TT and latterly with the A5.

The new A4 continues this tradition.

The ride is firm but not uncomfortably so, the handling is planted at all times with little body roll even during hard cornering, the steering now has much more weight and feel engineered into it and the manual gearboxes shift better than before.

The engines are familiar from the A4 saloon, with the only noticeable change being the 2.0 TDI adopting a common rail injection system.

This makes the model, set to account for the majority of sales, more refined yet more powerful, too.

On the road it has plenty of torque from low revs yet never becomes coarse or loud under hard acceleration.

Fourth gear provides a surge of power from low speeds while in sixth gear the A4 lolls along at low revs.

The 2.7 and 3.0 TDI diesels are lovely, with smooth V6 engines and bags of power in reserve for effortless progress.

The latter, with quattro four-wheel drive and a Tiptronic automatic gearbox, will take some beating as the ideal all-rounder.

The roomier interior is welcome, as is the low sill height which makes loading a less back-breaking affair.

Factor in a more cohesive design than the saloon and the extra practicality afforded by an estate and the A4 Avant makes a strong case for itself.

With more room inside and great looks, especially in S line trim, the A4 Avant should hold on to its title of best-selling premium estate.

The 2.0 TDI diesel makes for a fine all-round package for cost-conscious fleet buyers and drivers.