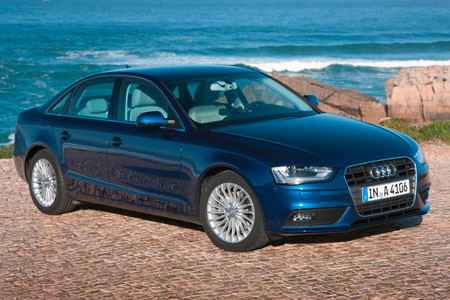 Audi likes to avoid using the term facelift, preferring instead to focus on the changes that have been made to what is essentially a model that’s been tweaked ready for the March plate change next year.

The revised A4 will go up against the next-generation BMW 3 Series, so the subtle style changes will have to be enough for now to keep customers from jumping into a competitor. Prices have gone up by £200 across the range, but Audi says customers get styling and efficiency gains for the extra cash.

Efficiency has been the main benefactor with economy improved by 11% on average across the range. Start-stop engine technology is now standard on all models so that helps to bring down CO2 emissions to 112g/km on the 136bhp 2.0-litre diesel saloon and fuel economy is now at 65.7mpg. That’s slightly off the 3 Series’ 109g/km and 68.9mpg of the 320d Efficient Dynamics – which means the BMW is £10 cheaper to tax in VED band B.

New gadgetry includes a driver-fatigue detection option which will alert drivers if they start drifting off at the wheel, as well as lane and blind spot monitoring systems.

The latest adaptive radar cruise control also has a low-speed braking function, which aims to avoid or reduce impacts at less than 19mph.

Audi has added an ‘efficiency’ mode to its Drive Select system. Like BMW’s Eco Pro, Efficiency mode allows the car’s systems to be operated at their most fuel-sparing level. The inclusion of this feature means Audi can match BMW on a feature that will tempt customers aiming to cut fuel costs.

The volume-selling 2.0-litre TDIe performs well, offering plenty of pull and it’s whisper quiet on the motorway. The A4 will effortlessly eat up motorway miles and a revised suspension means it’s also more comfortable than the outgoing model.