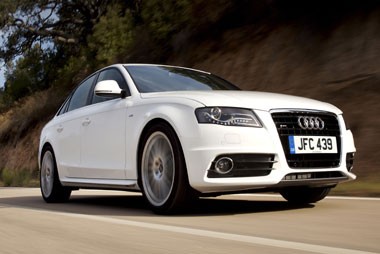 It seems that every time I speak to somebody in the fleet industry they have been driving, or are about to drive, an Audi R8.

Distilling into the purest sense what the Audi brand and design philosophy is all about and encapsulating the lofty ambitions of the firm, it seems Audi is trying to get as many bums into its tightly-hugging seats as possible.

Because as ambitions go, nobody can beat Audi’s energy at the moment as it hauls itself up the premium pecking order while selling more and more cars – 100,000 last year and counting.

And all that effort is being rewarded because, for the first time, Audi has launched a volume car whose residual values are predicted to go to the top of the class.

In itself, this is a milestone, because previously any new Audi has always had future values a couple of percentage points below BMW, but this time CAP has 2.0-litre TDI models at 46-47%, and the equivalent 3 Series at 42-43%.

Of course, lifecycle has a part to play in the figures, with the
3 Series due to get a major mid-life facelift in the second half of the year, but the very fact that a new Audi can now take its turn at the top speaks volume for the brand.

It has made it. Big time.

In many ways, the A4 is about as radical as the gardening section of the Daily Telegraph.

Nothing will shock or surprise you: you can’t argue about the way it looks, you won’t be surprised by the way it drives, while the engines are all exactly what you will have come to expect.

Also, the interior is entirely familiar.

The A4 conforms the template of premium brand stability and conservative development that Audi has slavishly followed for its core volume cars for more than a decade.

Even its one poke of the stick at its contented buyers’ bulk, the large trapezoidal grille introduced on the A6 in 2004, produced some minor harrumphing before everybody decided quite quickly that they rather liked it after all.

So what is new and exciting about this car?

Well, almost everything is new (but not especially different), while as for exciting, the jury’s out on that one. One of the biggest gains over the old car is in interior space.

This is thanks in part to the 15cm longer wheelbase, as well as being 5cm wider.

Overall the car is considerably bigger, and not far off 20cm longer than even a 3 Series.

It looks big too, and the scowly LED running lights (standard on S line models) from the R8 give it a low and mean appearance.

There’s no doubt that the A4 has gone upmarket, using a lot of technology that Audi has previously only offered on bigger models, such as electro-mechanical parking brake, rear view parking camera, intelligent key, lane assist which vibrates the steering wheel if you drift, side assist keeping an eye on the blind spot, adaptive cruise control and steering as well as seats that cool as well as heat.

Many of these are options but the fact they are offered suggests Audi thinks that buyers with more cash will be speccing the cars more richly.

Also noticeable for this car is that it gets a full-on, integrated version of the Multi Media Interface system.

On the previous car, the upgrade to MMI was a bit low rent with a small plastic dial and fiddly buttons. Never in doubt was how logical and efficient the system was and, now built into the transmissions tunnel, it gives the new A4 a higher-quality feel.

Despite all these premium features, the 2.0-litre diesel model will dominate the registrations, perhaps taking up as much as two-thirds of all sales.

These are estimated to be around 24,000 in a full year, with fleet taking as much as 70% of all registrations. 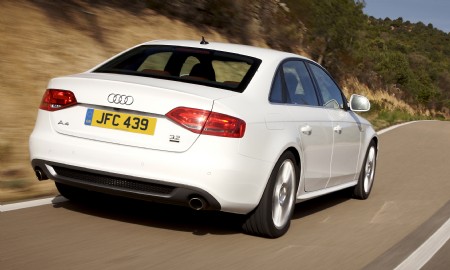 Audi doesn’t expect to increase sales of the A4 noticeably. Instead, the firm’s remarkable growth will continue through the huge number of niche vehicles on their way over the next few years.

There is a slight price hike over the previous model but it is not huge and the A4 still retains its position as being the cheapest of the three German premium brands in this sector.

The A4 has always been a highly efficient driving machine, but not one that stirs the soul.

This new car retains the clinical approach, but there is a little more feel and a number of the shortcomings have been addressed too.

For a start, the 2.0-litre TDI is much smoother and more refined, while in front-wheel drive form it feels much more composed, with less tendency to understeer.

The steering also feels a little weightier on this model, although lightens at low speed for manoeuvring.

As for performance, the 143bhp engine does everything you expect while managing 51.3mpg.

The 2.7-litre diesel was the big surprise. It’s an engine that hasn’t made many headlines in the A4, partly because in auto form it only came with whiny Multitronic, but in the new model that gearbox has been improved immeasurably.

It is now more precise and decisive, thanks to improved technology and eight ‘gears’ and alongside the engine provides a very quiet, smooth powertrain.

The big 3.0-litre diesel, with 240bhp and Quattro four-wheel drive, is the performance star of the range.

This car has vast levels of grip, huge shove and the steering is much more communicative, while the brakes are outstanding. Superb.

There’s no doubt the new A4 is incrementally better than the old car in every way.

It is bigger, classier and better to drive.

It conforms rigidly to every expectation, which doesn’t make it an exciting leap forward, but means that it slots seamlessly into the dependable premium business saloon category.