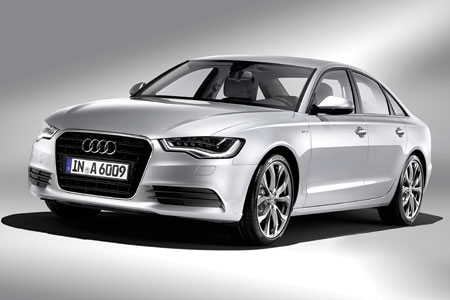 Petrol-electric hybrid cars have been around for more than a decade and initially cars such as the Toyota Prius and Honda Insight were focused on ultimate fuel economy.

But since 2005, we’ve seen premium-badge hybrids from Lexus, which have sought to offer high performance with reduced fuel consumption and CO2 emissions.

Only recently have other car manufacturers begun introducing alternatives to the Lexus (which now offers hybrid technology in four body styles in Europe), with the Infiniti M35h and the recently announced BMW ActiveHybrid 5.

Audi seems to have gone down a slightly different route with its hybrid version of the A6 saloon, due in 2012.

Rather than use a powerful six-cylinder petrol engine in conjunction with an electric motor to produce a sub-six seconds 0-62mph time as with the M35h, 5 Series and the latest version of the Lexus GS due next year, it has chosen one of its turbocharged four-cylinder engines.

The A6 Hybrid uses a 211bhp 2.0 TFSI engine with an electric motor powered by a lithium-ion battery, offering a combined total of 245bhp.

It makes the Audi around 100bhp shy of hybrid saloon alternatives, although it should also mean a lower pricing point for this technology when it goes on sale in 2012 – expect a £40,000 price tag rather than the £45,000-plus of its more powerful rivals.

We drove the A6 hybrid on a 15-mile route combining a number of different types of road, and the A6 will offer no real surprises for anyone who has driven a full hybrid vehicle before.

It’s capable of running on the electric motor alone for up to almost two miles at a constant speed of 37mph where conditions allow.

When accelerating, the extra torque of the electric motor provides a noticeable boost to the already substantial performance from the turbocharged petrol engine, and as is typical with petrol-electric hybrids, overall refinement is top drawer.

Provisional figures show a 7.3 second sprint to reach 62mph from rest, and the car never feels lacking in performance. It is also the lightest hybrid in its class at 1,770kg, helping it feel agile when tackling more challenging roads.

Fuel consumption is stated (provisionally) at 44.1mpg with CO2 emissions of 146g/km. This sounds fine in isolation. But with BMW’s 340bhp ActiveHybrid 5 achieving 149g/km, and with 145g/km expected for the new Lexus GS450h, it seems Audi needs to work harder in this area.

At least a list price advantage will give it lower tax liability than its rivals, and it will make the technology accessible to more drivers.