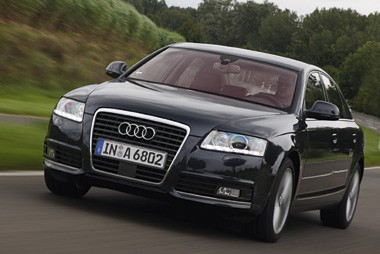 Like just about every other manufacturer refreshing its model range at the moment, Audi has played it safe with its mid-life revisions on the A6.

Really, if you can spot them you’re either an Audi salesman or you need to get out more.

For the record, there’s slightly revised rear lights, indicators in the mirrors and, if you opt for the smart S line trim, Audi’s signature LED lights.

It is under that familiar skin where Audi has been making more important changes – crucially, to economy and emissions.

The net result is a range that boasts a 12% improvement in fuel consumption.

That improved fuel economy hasn’t been at the expense of performance either – the new 3.0 TFSI petrol engine offers more than 27% more torque and 13% more power than the outgoing 3.2 FSI, yet returns a 16% improvement in fuel consumption and shaves 0.8 seconds off the 0-62mph time.

The key addition to the range, though, is the new 2.0 TDIe. Audi’s lowest emitting A6 offers CO2 emissions of just 139g/km and a combined consumption figure of 53.3mpg.

It achieves this thanks to modified transmission ratios, a 20mm reduction in ride height and aerodynamic modifications. A key fleet model then, that’s aiming squarely at BMW’s fficientDynamics-equipped 520d.

Detailed suspension changes mean the A6 rides with far more composure than before, sharp bumps and ripples being better isolated from the cabin.

Inside, the A6’s cabin is among the best for comfort, style and ease of use. It’s also among the most spacious cars in the class.

Where the A6 fails to live up to its BMW 5 Series and Mercedes-Benz E-Class rivals is among the smaller engines.

The 2.0 TDIe model feels a bit overwhelmed at times and refinement suffers badly when you extend it.

The A6 is not as sharp or as involving to drive as its BMW alternative either – the A6 countering with the sort of long-legged ability that makes it an excellent daily driver.

Audi has added polish to its A6 range by improving in key areas that appeal to fleet buyers.

The good looks and smart interior remain a real draw.