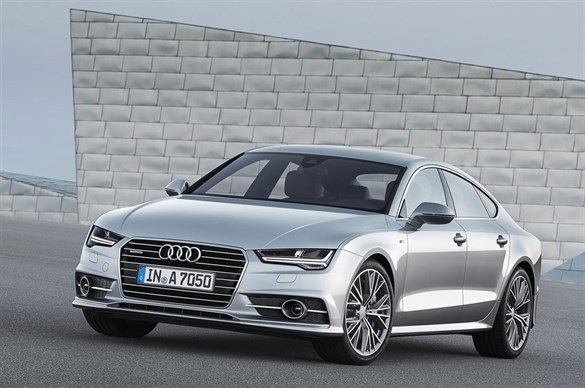 An unrivalled blend of performance and economy should soon be helping Audi tighten its grip on premium sector car sales in Britain.

With a next-generation diesel engine boasting dramatic improvements in efficiency and tailpipe emissions, the latest A7 Sportback is on course to extend the firm's market lead over rivals BMW.

“Getting to the number one position last year was fantastic and we had an advantage of around 9,000 registrations at the half-year point this year. Obviously, our focus now is to maintain the lead we've worked so hard to achieve.

“The improvements in the next A7 should be a big help in this respect – as a result of  its improvements, the car will have a much broader appeal and we think it will be seen as a more credible alternative to the traditional executive saloon, estate or sport utility products,” Audi UK product manager Amy Wand told Fleet News.

Due in November, the new car's reworked V6 motor develops 17bhp more than the current engine, is 13g/km cleaner and returns 5mpg better economy – improvements that rate for a two per cent lower benefit tax rating.

“This technology takes us a big step forward. It puts us in a class-leading position and is great news for the brand. As a result of early conversations with key corporate, hire and leasing contacts, greater interest is already resulting in an uptake  in quotations.

“Even though it is a niche model, we achieved 2,500 sales of the A7 last year. Now we're really looking forward to the showroom impact of the new car,” said Wand.

Slightly longer and looking sleeker thanks to a revised grille, bumpers and new LED headlights, the front-drive SE is the new lead-in A7 model but the car we drove in Sweden looked anything but with handsome cedar brown trim, a reworked dash layout, impressive upholstery materials and fine detailing.

A dynamic handling system fitted as standard produces a precise, quiet and comfortable ride at all speeds along with a relaxed, confident cornering stance and the new S tronic auto transmission makes the best of the impressive engine output by allowing a smooth, progressive flow of power.

With a rear seat bench shaped for two occupants, accommodation is spacious but the bodywork is also practical, with a 535ltre boot extending to 1,590litres when the  rear backrests are folded.

“Compared with the previous lead-in car, the new SE will be £1,240 more expensive – but the customer will have a net value benefit of more than £2,000 because the value of the added specification is more than £3,000,” said Wand.

Coupés might not be particularly common on company fleets, but there are a few that can offer the right balance of desirability for perk car drivers with acceptable running costs.