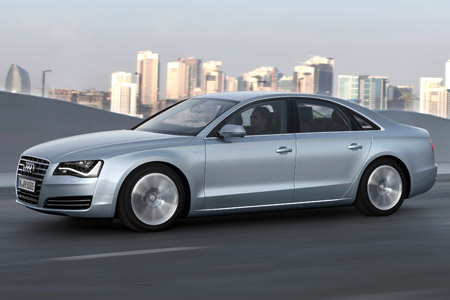 It’s possible to sense a little nervousness when talking to Audi senior executives about the A8 Hybrid and its prospects in the UK.

Hybrid cars are new territory for the brand. With such a strong heritage in diesel – indeed, pioneering TDI at Le Mans and winning – Audi’s continued growth in sales in the UK has been achieved without it.

And Audi’s hybrid powertrain is based on the 211bhp 2.0 TFSI petrol engine. Indeed, we tried the Audi A6 Hybrid with this powertrain last summer and, although it drove quite well, Audi has since decided not to bring it to the UK because the numbers didn’t stack up so well compared to diesel.

Which brings us to the A8 Hybrid. The only other Hybrid in the luxury saloon sector in the UK is the Lexus LS600h. The performance of its 5.0-litre V8 petrol engine and its electric motor allows Lexus to price it alongside 12-cylinder models in the sector.

But the sector is dominated by six-cylinder diesels so it’s understandable that Audi’s first step with A8 Hybrid is so tentative.

In the lightweight aluminium A8 the cost proposition is far more favourable than in other Audi models.

In Germany, where a 159g/km front-wheel drive A8 TDI is already on sale, the A8 Hybrid will have a similar price tag.

UK prices have yet to be established, and Audi’s UK staff suggested we pay no attention to the German market prices as UK A8s are generally better equipped at entry level.

But if this applies across the A8 range, this supposition is meaningless.

So the hybrid has CO2 emissions of 147g/km – 12g/km lower than the forthcoming front-wheel drive 204bhp A8 3.0 TDI, and for the next few years a five-BIK tax band advantage including the 3% supplement on diesel.

The combined output of the hybrid drivetrain is 245bhp and thanks to the electric motor powering the rear wheels, the A8 Hybrid has four-wheel drive (so don’t be surprised if Audi slaps a handsome premium on it over the new entry-level diesel).

Performance is brisk in the sense that you’d have no idea there was a four-cylinder engine under the bonnet. Much of the A8’s progress is made silently even without the benefit of electric power only at low speeds for short distances.

The major downside is the technology takes up a lot of boot space. It has 335 litres (a little less than an Audi A3 Hatchback) instead of 510 litres.

But for company directors really buying into cutting CO2 emissions, and many chauffeur fleets, especially those based in towns and cities, the A8 Hybrid could find its niche.