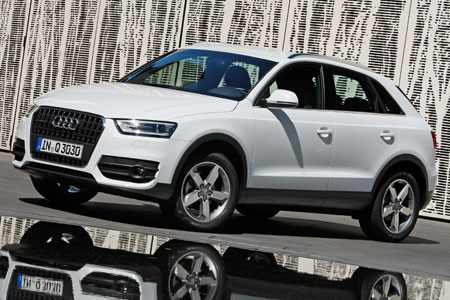 Audi’s new model proliferation seemingly knows no bounds as it seeks to fill every discernible niche in the car market.

The latest effort is the Q3 – in a similar vein to the successful Q5, but on a slightly smaller scale. Rivals – or at least premium-badge rivals – in the sector are also relatively new with the BMW X1 a couple of years old and the Range Rover Evoque having arrived on the scene a few months before Q3.

It’s hard to deny that Audi has been around long enough to know what will work with customers, particularly user-choosers, and most of those ingredients are here: sophisticated interior with top quality materials, a range of low CO2 engines with strong performance, and typical Audi styling.

For now, diesel versions have Quattro four-wheel drive and a seven-speed S-tronic double-clutch auto which, combined with the 177bhp 2.0 TDI, result in 156g/km CO2 and 47.9mpg. However, next year front-wheel drive models join the range using a 140bhp 2.0 TDI, with CO2 emissions of 137g/km and fuel consumption of 54.3mpg. This perhaps would find favour with more fleet users, especially those whose policies exclude 4x4s.

Audi claims a major practical advantage over its BMW and Land Rover rivals: as the Q3 has been designed with a transverse engine (unlike the longitudinal layout of its competitors), it can be roomier inside yet remain compact.

The Q3 is remarkably agile at low speeds, and doesn’t feel any more unwieldy than a compact family hatchback.

The unfortunate trade-off is a desperately fidgety ride, more akin to a Mini than a family car.

One other potential problem for the Q3: with it’s straight-laced Audi looks, put it alongside a Range Rover Evoque and ask a driver to choose, the road presence and proportions of the new Land Rover would have it win any kerb-side popularity contest.