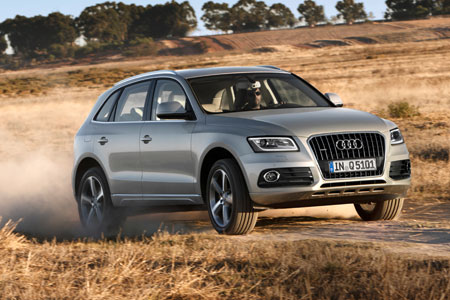 The Q5 is Audi’s medium-sized SUV and is now available to order in facelifted form with lower CO2 emissions and improved fuel economy.

Although it seems there is still a place for SUVs among fleet operators, it is generally restricted to user-choosers.

It isn’t difficult to see why these vehicles that once had operating costs close to large saloons and hatch-backs thanks to towering residual values have become less desirable.

Fuel prices made the used values of these vehicles volatile, and while a few sharp winters threw the advantages of four-wheel drive back into focus, running SUVs to ensure drivers keep mobile during icy conditions isn’t best practice when it comes to duty of care.

But as the traditional fleet fare of saloons and hatchbacks have made the biggest improvements in fuel efficiency over the past few years, the SUVs have begun to catch up.

As well as reducing fuel costs it would also have the likely knock-on effect of making them less susceptible to volatility on the used vehicle market.

While BMW seems to have dominated introductions in the SUV sector, Audi has followed it with products that seem just as desirable.

The revised Q5 arrives less than two years after BMW introduced its second generation X3 with all the benefits of EfficientDynamics technology, but Audi has been catching up and has an ace up its sleeve.

Like the X3, the Q5 will be all-wheel drive only in the UK, but Audi will be introducing the 143bhp version of the 2.0 TDI by the end of the year, giving it’s a list price advantage of a few hundred pounds over the 184bhp BMW X3 xDrive 20d.

There is also a 177bhp 2.0 TDI which is perhaps the more realistic rival for the entry-level X3, this one offered with the choice of a six-speed manual or with Audi’s seven-speed S-tronic dual clutch automatic transmission as an option.

The 143bhp variant with manual gearbox is more than adequate as the first rung on the Q5 ladder. Changes for the facelift include a new shape for the LED daytime running lights as well as a smartened up with more chrome trim and other revisions.

Another new element to the range is the SQ5 which uses a twin-turbo 3.0 TDI V6 producing 313bhp although CO2 emissions are a little high for much fleet interest (to be confirmed, but expected to be around 190g/km). It’s Audi’s first diesel S model, and as yet no rivals have an answer to that.