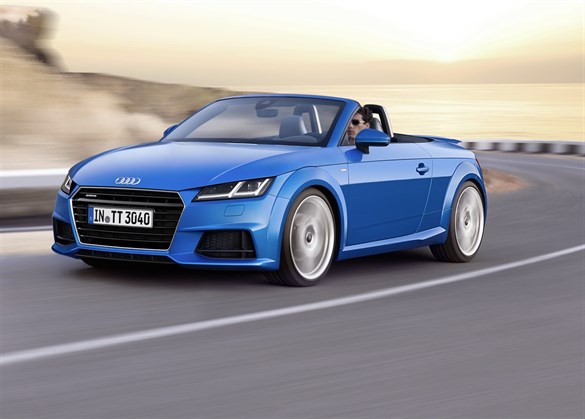 Despite two-seater convertibles being excluded from many companies' choice lists, Audi’s TT Roadster has gained a solid following among user-choosers.

In 2013, the last full year of sales before the range went into run-out, the manufacturer sold 2,257 TTs to fleets, with around 20% of these convertibles.

Of these, around one-third were 2.0 TDI models – the previous generation’s most fleet-friendly variant.

In the new range, the 2.0 TDI unit is again the most efficient option, but offers slightly more power, and vastly greater efficiency, than its predecessor.

Official combined fuel economy rises 23% to 65.5mpg, CO2 emissions fall 26% to 114g/km, while power has risen 8% to 184hp. This puts the TT Roadster in the 18% benefit-in-kind tax bracket, three points lower than its predecessor. So, on paper, the TT Roadster makes a strong case for itself. This continues in the metal and on the road, too.

The convertible shares the coupé’s aggressive styling, which Audi says will have greater appeal to male drivers than the previous, curvier model. As with all Audi convertibles, the TT features a fabric roof, with the manufacturer saying this is due to weight and aesthetic advantages over folding metal hardtops. It can be operated at speeds up to 31mph and, when stationary, it can be opened or closed using the key from up to four metres away.

The Roadster shares the coupé’s interior, including Audi’s virtual cockpit technology. This is based around a 12.3-inch high-definition display that fills the driver’s instrument binnacle and replaces the traditional dials.

Drivers can choose between two display modes: 'classic' and 'infotainment'. Classic sees the speedometer and rev counter in the foreground, while these are smaller in infotainment mode, to free-up space for other functions such as the satellite navigation map.

The driver is made to feel the focal point of the interior: all toggle switches in the centre console are angled towards them, but it also means a passenger cannot operate or see the navigation or media systems.

On the road, the TT Roadster feels surefooted, with precise steering and a firm-but-comfortable ride. The engine produces plenty of power, and is able to pull away cleanly from low revs as well as being happy to sit at 3,500rpm and above, and its diesel noise is never too intrusive.

When up, the fabric roof does a good job of minimising wind and road noise, making the TT Roadster an excellent all-year round car. It has a smaller boot than the coupé (280-litres, compared to 305), and costs around £2,200 more. First deliveries of the TT Roadster begin in May.