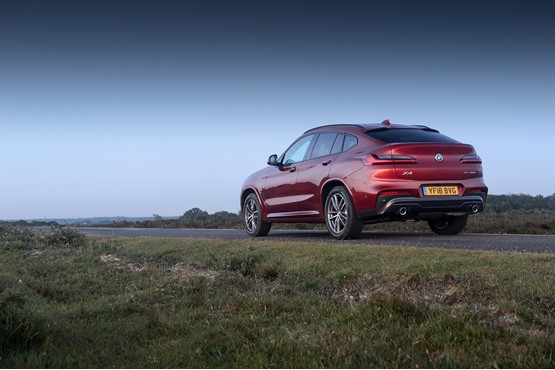 The proliferation of well-priced and efficient SUVs has given the company car user-chooser unprecedented choice.

And, as premium brands have come to rely on them for growth while seeking to remain ‘exclusive’, there have been increased efforts to differentiate one closely related model from another.

The new BMW X4 is a case in point. The first BMW X4 – one of those SUVs with a coupé-like cabin profile – appeared mid-way through the lifecycle of the previous X3.

It was broadly similar to the X3, about the same size, but with a different body shape. However, it was relatively short-lived because its underpinnings, along with the X3’s were due for updating this year.

For the new X4, despite the obvious different silhouette from the X3, BMW appears to have gone to greater efforts to give it its own identity, which is a more difficult claim for its rival, the Mercedes-Benz GLC Coupé to make.

There is a choice of four-and six-cylinder diesel versions, all fitted with an eight-speed automatic transmission, and a high-performance diesel M40d and petrol M40i top the range. But the majority of UK sales will be in the 190PS 2.0-litre 20d versions.

The entry-level model is the Sport, but the M Sport is likely to be more popular in the UK, while there is also an M Sport X variant with slightly more rugged styling.

While the X4’s dashboard design is identical to the X3, the X4 comes with heavily bolstered sports seats and the rear compartment has three full-size seats.

Rear passengers have an additional 27mm of legroom over the previous model, while the boot has a capacity of 525 litres with the rear seats in place, expanding to a maximum of 1,430 litres to roof height by folding down the sections of the rear backrest, with its standard 40:20:40 split.

The X4 also has the option of an extended storage pack, comprising additional hinged compartments, USB ports and 12V sockets, as well as hooks and lashing rails in the boot.

Also standard is the latest version of the iDrive interface, centralising navigation, communication and infotainment functions.

Its dashboard display now takes the form of a freestanding monitor with a 6.5-inch screen, while the high-resolution display that comes with the Professional Navigation System measures 10.25 inches and includes touchscreen functionality and a semi-digital instrument display (standard on M Sport, M Sport X and M Performance models).

The voice control system has also been improved and there is the option of using BMW gesture control, allowing certain functions to be operated with simple movements of the hand or fingers, which are registered by a 3D sensor in the centre console and translated into the relevant commands.

Another option is the new-generation head-up display, with a 70% larger projection area.

The X4 is equipped as standard with cruise control with braking function as well as collision and pedestrian warning with city collision mitigation.

The optional semi-autonomous active cruise control with traffic assistant function is capable of braking the vehicle to a halt and setting off again automatically.

The Driving Assistant Plus safety package offers enhanced safety features in one cluster.

The X4 is offered with parking assistance for the first time, and includes ‘top view’, ‘panorama view’ and ‘3D view’ functions, which combine to depict a 360º image of the vehicle and the surrounding area on the dash screen.

The ‘remote 3D view’ function additionally gives drivers the ability to call up a three-dimensional live image of their vehicle and its immediate vicinity on their smartphone.

The X4 feels more involving on the road than its X3 sibling, thanks in part to its wider stance and lower centre of gravity, and always feels responsive when overtaking.

It won’t be everyone’s cup of tea and isn’t as practical as an X3, but the X4 has its own identity, and has appeal for driving enthusiasts after the image of an SUV that stands out a little from the crowd.