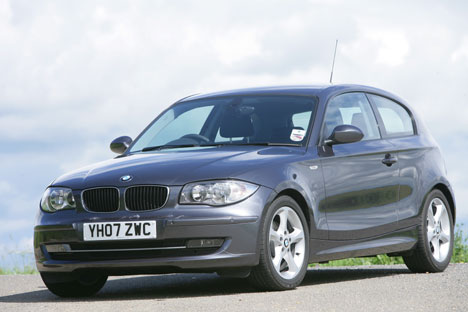 I’ve been out of the 1 Series for a couple of weeks while I was roadtesting other cars and I have to say it was good to be back in the BMW.

I’ve commented before that it’s not the biggest car but for a driver there’s a tactile delight in getting behind the thick steering wheel, into the tight embrace of the sports seats and clipping the gear lever into first.

Of even more delight now is the sight of that fuel needle resolutely refusing to budge on all but the longest journeys.

The other day, while heading into north London, I saw a garage advertising its diesel at a horrific 108.9 pence per litre.

Luckily I was chugging along at 50mpg-plus so was able to make it back to rural Lincolnshire, where diesel was only 101.8ppl.

It’s enough to almost make you want to take the train.

Fortunately, though, the 1 Series is far too enjoyable to make you share your travels with the great unwashed, and it’s made all the more entertaining by the iPod adapter.

Plug the type of lead that you update an iPod with on your PC into the USB socket under the armrest and the track, artists, album and genre appear on the screen.

It doesn’t seem to have a function that allows you to scroll though your music and select tunes, instead using the iPod’s shuffle facility, but at least you don’t have to listen to Chris Moyles’ arrogant babblings on Radio 1 or Rutland FM.

With the onset of winter, I’ve been interested to find out what life would be like in a short-wheelbase, high-torque, rear-wheel drive car when it rains and the roads get covered in mud and leaves.

There’s no doubt that traction and grip is an issue that BMW is acutely aware of.

The 1 Series’ suspension is incredibly stiff, not helped by the rigid sidewalls of the run-flat tyres.

An engineer told me once that as rear-wheel drive cars get torquier and more powerful engines, stiffer suspension settings and increasingly nannying traction control are necessary to keep them pointing forwards.

Well, the stiff suspension is certainly in evidence, although the Dynamic Stability Control – BMW’s version of ESP – very rarely kicks in, so there must be decent reserves of grip in most conditions.

I have picked up an unexpected cost, though.

I put the 120d through the car wash the other day and discovered when I got home that the cover for the rear windscreen wiper spindle had fallen off. Suitably vexed, I raced to the BMW dealer in Peterborough, where a new part was ordered.