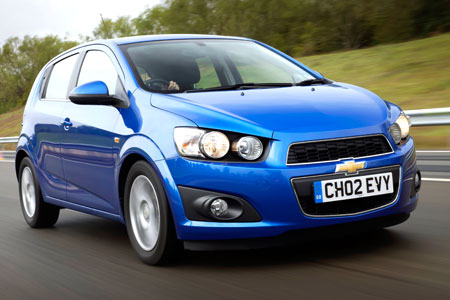 This could be a controversial statement, but it might be a good way to start: the Aveo 1.3 VCDi is the best car Chevrolet produces.

No doubt dyed-in-the-wool fans of low-cost, unsophisticated V8 coupés and convertibles will disagree but, as a product, the Aveo stands up better to comparison with rivals than any other.

Those iconic V8 cars, the Camaro and Corvette, lack the panache of European and Japanese rivals that achieve much more with far less horsepower.

The Orlando MPV is practical, but fuel consumption and CO2 emissions aren’t close to being competitive with rivals.

The Captiva is decent value and capable, but some interior fittings seem below par even for a budget-brand model while the Cruze is roomy and attractive, but has a few too many rough edges to be talked about in the same breath as a Ford Focus or Volkswagen Golf.

The Spark is a decent and likeable city car and has much to recommend it, but the Aveo – this new model for 2012 – is actually very impressive.

Its twin-headlamp front end and prominent grille makeit stand out, and the car also achieves a five-star Euro NCAP score.

Inside, its central LED speedometer display alongside an oversize analogue rev counter is quirky, but still easy to understand, while many of the switches and buttons feel sophisticated and robust. In fact, they look very similar to those you’d find in a Vauxhall Astra or Corsa.

The 1.3-litre diesel engine is the latest incarnation of a long-serving motor, versions of which have powered Fiat, Alfa Romeo, Vauxhall and Suzuki (built under licence models), and here it produces a handy 95bhp.

In the Eco model (£450 more than the standard version of the engine) it comes with idling stop/start technology. This results in CO2 emissions of 95g/km. This puts it in the same ball park as other small cars with air conditioning as standard.

It’s nicely muted and has plenty of performance for a car of this size and price. It will reach 60mph from rest in 11.7 seconds although the 140lb-ft of torque from 1,750rpm always makes it seem livelier on the move.

The Aveo has a roomy interior, and is able to seat five adults, although these cars are rarely needed to transport a full set of grown-ups, and this isn’t at the expense of boot volume either, which is a competitive 290 litres.

As an all-rounder, the Aveo probably ticks more boxes than most other small cars at the budget end of the spectrum, and in the Chevrolet range it stands out as a star performer.