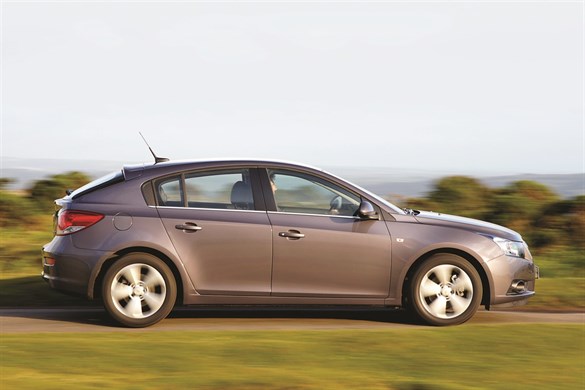 To most car buyers in the UK, saloons imply ‘premium’ and ‘large’. For smaller cars they seem to have much lower appeal.

While Chevrolet launched the Cruze in 2009 into the high-volume lower-medium sector, it has only been able to offer a saloon version up to now.

But it has now launched a hatchback, more acceptable to northern European tastes, and with useful luggage capacity greater than most cars in its class.

The 2.0-litre diesel is common to other Chevrolet models, and versions of it are used in the Vauxhall Astra and Insignia. With no specialised fuel saving technology, its CO2 emissions are high for this type of car.

But high value rivals from Kia and Hyundai don’t offer an equivalent model, so with the lower price of the Chevrolet compared with cars like the Ford Focus and Vauxhall Astra, and perhaps the trusty Skoda Octavia, the tax liability is still considerably lower.

Chevrolet’s range of cars in Europe is largely based on Korean-built models that have their origins in the old Daewoo line-up, although the entire model range has been updated since Daewoo disappeared in 2005.

And like many cars that used to be marketed under a ‘budget’ banner, seem to have caught up with many of the mainstream brands in terms of technology and sophistication.

Much of that shift upmarket is evident in the Cruze, with smart blue-backlit instruments and a choice of dashboard finish depending on the equipment grade – mid-spec cars have fabric on the passenger side, while top LTZ models have a soft-touch panel, and can be chosen with an ‘executive pack’, which adds leather seats (heated for front seat occupants) and a factory-fit sat-nav for £1,500.

Apart from too little resistance in the steering when cornering, the Cruze is a fine car to drive, with decent comfort and good body control. It might not have the ultimate poise of the Ford Focus or Volkswagen Golf, but the Cruze is a decent non-mainstream alternative.