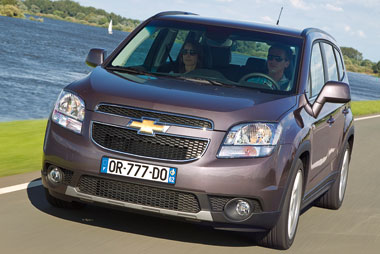 High value and rich specification lists are to be key elements in a plan to win fresh fleet sales for Chevrolet.

After losing more than 4,000 registrations when it pulled out of leasing and bodyshop sectors a few months ago, the US brand will begin bidding for new rental and contract hire business in spring.

In the vanguard of the move is the Orlando, the firm’s first compact seven-seat multi-purpose car due on sale in March.

Aggressive pricing starting at £16,395 will allow it to undercut every rival.

By summer, the growth plan will be bolstered by a five-door version of the Cruze, the car seen as Chevrolet’s main fleet contender.

Volumes have yet to be set, but managing director Mark Terry told Fleet News the Orlando’s spacious interior and versatility will allow Chevrolet to woo business drivers and help it become a major player in the Motability market.

“We think the low P11D values and low CO2 figures of the Orlando will also appeal in the end user-chooser, rental and company car sectors and I’m confident we will regain the sales we lost. The car will play an important part in our growth strategy.

“If the tax regime remains unchanged, we should be in a great position because companies are looking to switch to vehicles offering better value. We’ll have the right packages at the right time,” he said.

Based on the Cruze platform, the chunky MPV comes in three trim levels and is powered by a five-speed 1.8-litre petrol motor or six-speed 2.0-litre diesels offering 130bhp or 163bhp.

This model costs from £18,195 but diesel versions are available with a £2,000 executive pack that adds 18-inch alloys, leather trim, heated front seats and satellite navigation.

In seven-seat mode, loadspace is just 89 litres behind the rearmost seat backs, but this rises to a useful 1,487 litres when second and third row seats are folded to provide a flat floor.

All versions boast a major novelty in the form of a clever hinged unit in the centre of the dash panel that houses stereo controls but swivels open to reveal a compartment for concealed iPod connectivity and also allows storage for other small items.

The 130bhp diesel is the pick of the bunch for performance and economy.

This version of Chevrolet’s latest power unit is faster than the petrol motor, has 8mpg better economy than the petrol version, at 47.1mpg, and feels just as sprightly as the higher output unit.

With all the torque it needs to carry super-high six-speed gearing, it is relaxed on motorways with the rev counter needle hovering below the 2,000rpm mark at 70mph.

The Orlando may not offer Ford C-Max sophistication, but it is a capable, comfortable and competent alternative costing considerably less.