Citroen’s diesel variant of the new C4 Cactus could be eco champ for high mileage fleets, according to first drive

"Even on the worst examples of Tarmac, the Cactus was simply sublime. " 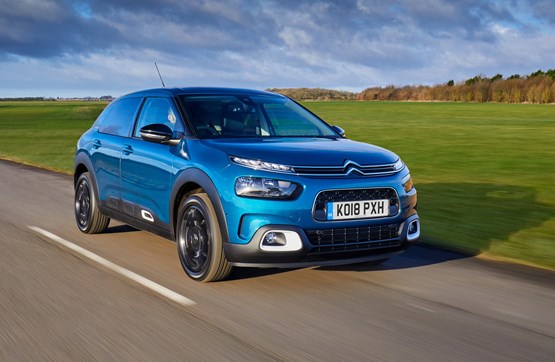 When Citroën launched the C4 Cactus in 2014 it was like nothing we had seen before. Opinions were divided and the Cactus was very much a love it or leave it proposition.

The new model is expected to win more fans. So much so that Citroën is axing the regular C4 hatchback, giving the quirky crossover a place among key C segment rivals as well as SUVs.

Disappointingly (for some) this has meant the concept car styling has been toned down and the new Cactus now looks a lot more like the C3 Aircross and a lot less like something NASA would leave behind after a moon mission.

Gone are the large contrasting Airbumps that provided a shield against day-to-day scrapes and dings.

Citroën says the new car still offers 360-degree protection, despite its downsized Airbumps, but there are clearly a lot more painted surfaces on show.

The front end has been updated to reflect the look of Citroën’s revised SUV line-up, which includes the upcoming C5 Aircross.

Overall it is a cleaner-looking car, which is likely to gain a greater number of fans than it loses as a result of the changes.

On the inside things are more familiar. Citroën has opted to enhance the quality of what was already there rather than redesign it.

The general fit and finish is improved along with increased sound-proofing and thicker windows to give the Cactus a quieter and more refined interior.

When we tested the original car for six months, one of our main gripes was with the driving position. It just didn’t work for taller drivers.

Revised seats and improved adjustability of the steering column makes it easier to get comfortable. However, the position of the pedals means taller drivers will need to eat into the rear legroom significantly.

We were hoping Citroën would have redesigned the infotainment and climate control system on the new Cactus, but the existing seven-inch touchscreen remains.

It is unresponsive and difficult to operate on the move – frustrating given it is required to control almost every vehicle function.

In front of the driver is a digital speedometer, which resembles the display from a Casio calculator of the 1990s. While it worked fine on the old ‘quirky’ Cactus, it doesn’t quite cut it on the new grown-up model.

The new Cactus is the first Citroën to be fitted with the brand’s new Advanced Comfort seats. They are stuffed with high-density foam with an additional layer of soft foam and the concept works really well.

We spent around half a day in the car and felt none of the usual aches or pains at the end.

Another innovation is Advanced Comfort Suspension. It sees the re-introduction of the famous ‘magic carpet ride’ that was coined in 1955 at the launch of the original Citroën DS.

Using technology developed by Citroën’s motorsport division, a hydraulic cushion is fitted at the top of the spring to absorb the sharp jolts caused by potholes and rough roads.

Even on the worst examples of Tarmac, the Cactus was simply sublime. Our only criticism was the lack of dynamic capability that the car has on faster, smoother roads.

There are three models: Feel, Feel Edition and Flair. All get digital radio, Bluetooth and parking sensors. The Feel Edition comes in a choice of exclusive colours and has black alloys and red interior details.

There is one diesel, the BlueHDI, which is also the most frugal with CO2 emissions from 94g/km.

Citroën expects the top-spec Flair model with the 110PS petrol engine to be the best seller, with an overall fleet split of 55%.

We also tried the diesel and believe it will be the economy champion for higher mileage drivers. Official figures suggest an average of 76.3mpg is achievable and the motorway pace from the 100PS unit is noticeably better.

Driving back-to-back with a new Kia Stonic, the Cactus is noticeably ahead in terms of comfort. However, while both have chic styling, the ergonomics of the Kia are better and it is far more engaging to drive.

We did prefer the Citroën’s more efficient petrol engine though, which is quieter and more refined.