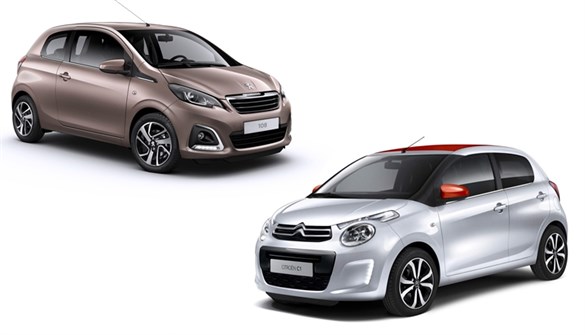 The second generation of one such successful partnership has resulted in three quite different looking city cars.

The Toyota Aygo, with its Zorro-style mask, was driven in the previous issue of Fleet News, but here we try the two French-badged cars in the partnership: the Citroën C1 and Peugeot 108.

The first cars produced under this agreement between Toyota and PSA arrived on the market in 2005.

They were built at a new Toyota plant in the Czech Republic, with Toyota overseeing design and engineering and PSA looking after local component procurement.

The exterior of the Peugeot and Citroën were quite similar (although the Aygo stood out more), while the interior was designed by Toyota, so only each brand’s badge on the steering wheel was a distinguishing feature.

For the replacement cars, PSA wielded more influence and was able to tailor the cars more to appeal to their own customers.

There was a competition between three brands for the basic interior design, and this time Peugeot won.

PSA wanted to offer a more powerful engine (there will be no diesel this time, as there was in the earlier years of the Peugeot 107 and Toyota Aygo), so its three-cylinder 1.2-litre is offered above the Toyota-designed 69hp 1.0-litre.

Peugeot and Citroën also wanted to offer a convertible option, with a retractable fabric roof, presumably based on the popularity of convertible versions of the Citroën DS3 (as well as the fact that there’s a similar feature offered on the Fiat 500).

Toyota declined both these innovations for the Aygo, or at least has done so far, giving Peugeot and Citroën a broader range.

Since the first generation of the cars was launched, the A-sector has gained a number of extra members. Volkswagen replaced the lacklustre Fox with the Up. The Seat Mii fills a gap in in the range left void by the Arosa, which departed in 2004. The Škoda Citigo is the brand’s first foray into the city car segment. But all three are the same design with minor changes to distinguish them. The sector is also going to gain a renewed focus with a new Renault Twingo and Smart ForFour, jointly developed, as well as a new Ford Ka, based on the previous generation Ford Fiesta.

The 108 is perhaps the least surprising looking of the two. It has a more mature look and is clearly a member of the Peugeot family.

Citroën seems to be appealing to a more youthful audience with the C1, and it includes an eyebrow-like secondary light cluster above the main headlamp, which, to my eyes, give it a rather angry expression, rather than the friendly one Citroën was aiming for.

We tried the C1 with the more powerful 82hp engine, which is certainly nippy enough for a small car. It’s hampered a little by a cumbersome gearshift, but it’s generally an easy car to drive, and relaxed enough for occasional motorway driving.

We also had optional Mirror Screen technology where connecting a smartphone allows the phone’s sat-nav app to appear on the car’s touchscreen display. As long as your phone retains its reception, it should be a more convenient and less expensive way of choosing sat-nav, and will become more prevalent across all vehicles in future.

We tried the 108 with the 1.0-litre engine, which is essentially carried over from the first-generation cars.

It still does a good job and has exceptional fuel efficiency and low CO2 emissions, particularly when chosen with optional stop-start. CO2 is 88g/km with fuel economy of 74.3mpg on the combined cycle.

It’s ideal for city life, feels keen enough accelerating up to 30mph and the car feels easy to drive. The engine noise, while retaining the distinctive note of a three-cylinder motor, is less intrusive than with the 107 (and first-generation C1 and Aygo).