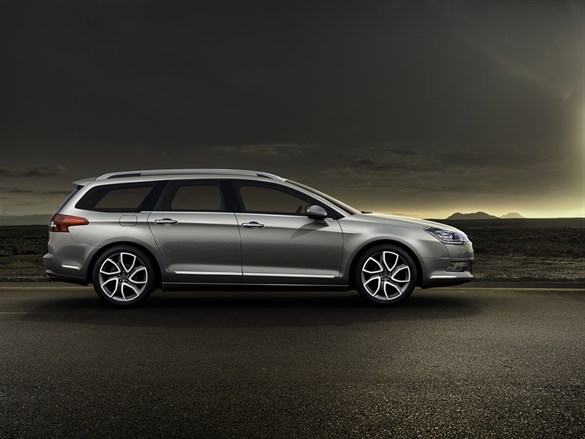 If the supposition that ‘there are no bad cars any more’ is correct, then the upper-medium sector is currently crammed with talent.

Competence is high because the sector has come under threat in recent years from the growth of compact SUVs and crossovers, as well as premium-badge cars.

It’s tough enough for the big volume players, such as Ford and Vauxhall, but even more difficult for those around the fringes in terms of sales.

Our example here is the Citroën C5 Tourer. Ironically, the C5 was launched in the UK in 2008 with an accompanying television advertising campaign that made much of the ‘German’ feel of its styling, design and materials, hid the Citroën badge until the end, and acknowledged that most customers aspire to owning a premium-badge car.

These cars have made the environment in which the C5 competes so difficult that brands like Citroën have become marginalised in the sector, in spite of the C5’s virtues.

The model was updated in 2012 with a number of detail changes. At the lower end of the range, the 1.6-litre diesel was upgraded with slightly more power and slightly lower CO2 emissions. At the top of the range the relatively thirsty 3.0-litre V6 diesel was replaced by a far more efficient four-cylinder engine.

The new 200bhp 2.2 HDi (with a six-speed automatic transmission as the only gearbox available) achieves 159g/km and has fuel consumption of 46.3mpg on the combined cycle.

It’s a responsive and comfortable car to travel in with excellent refinement. Despite being spun as a car that could pass as something German, inside it all feels rather French. Mostly in a good way but, with a refusal to move fuse boxes for right-hand drive models, there’s only half a glove compartment.

The fixed steering wheel centre, which first appeared with the original Citroën C4, is also fitted here (although it hasn’t survived into the second-generation C4).

Like its top-of-the-range predecessors, the largest-engined C5 is available only in the Exclusive equipment grade.

On the positive side it means the car has most features you’d expect on a top-end vehicle as standard. There is only a handful of options in the brochure. But it also means the car has a P11D value nudging £30,000.

No doubt a fleet operator would benefit from a healthy discount, or a leasing company would receive a decent level of manufacturer support, but consider this: BMW is about to launch a 320d EfficientDynamics Touring, and with an automatic transmission (to compare like-for-like with the C5) the 163bhp 320d offers 112g/km against the Citroën’s 159g/km. And while the C5 Tourer has often been chosen because of its practicality, the current 3 Series Touring has more outright boot space. No wonder life is tough in the mainstream.