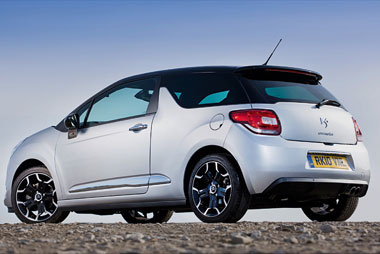 The Citroën DS3’s distinctive styling will not suit all tastes.

But the shark fin B-pillar, floating roof and LED strips alongside the front bumper will turn heads, if that’s what you want.

On test was the range-topping DSport powered by a 1.6-litre 155bhp petrol unit, which is essentially the same as the unit powering the Mini and was developed in partnership with BMW.

There are 95bhp and 120bhp petrol versions also available.

It is a fantastic engine for performance, although high CO2 emissions at 155g/km push it into the 19% benefit-in-kind tax bracket.

Economy is not going to win awards either.

The test car achieved far below the 42.2mpg suggested by Citroën – it was closer to 38mpg.

Of more interest to fleets are the two Citroën HDi diesels, including a 99g/km version in the DStyle, which is powered by a new version of the 90hp diesel engine.

The DStyle 99g has a quoted fuel economy figure of up to 74.3mpg.

But the distinctive looks come at a price – like its competitors, the car’s interior is slightly cramped, particularly in the rear.

Quality on the test car was thrown into question after the passenger seat failed to lock into position, and it slid forwards and backwards continually.

Citroen says no DS3 “need ever be the same, thanks to the virtually infinite array of different option combinations available”. Just make sure drivers opt for colours that will prove popular at re-sale.

The car ticks all the safety boxes but its real selling point is how it drives.

It offers one of the most engaging driving experiences on the market in this price range – £11,700 for the petrol VTi 95hp DSign to £15,900 for the DSport.