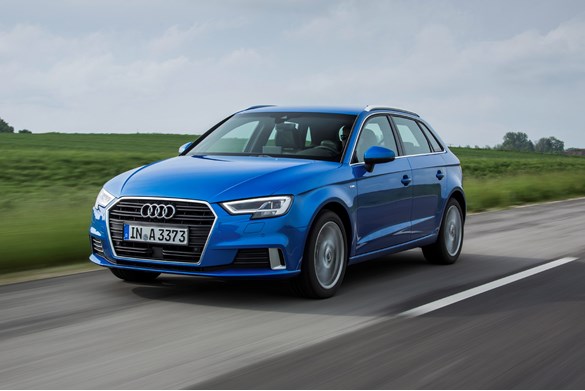 Audi prefers evolution to revolution when it comes to styling, and 2016’s facelift (Audi hates this term and prefers ‘product improvement’), would appear to conform.

The car, available to order now with deliveries from July, has few changes that stand out, but more significant developments have taken place in the cabin and under the bonnet.

In the four years since the current generation A3 was launched, in-car technology has advanced at a rapid pace, so this ‘product improvement’ gives Audi an opportunity to catch up with some of the developments since 2012, as well as add a few unique features for the class.

From the outside, the front end has new headlamps shaped like those on the new Audi A4, while, depending on trim level, xenon or LED lamps are now standard. There is a new LED lighting signature front and rear, and the bumpers have been redesigned at both ends.

A new 1.0-litre three-cylinder petrol engine, developing 115hp, replaces the previous 1.2-litre TFSI, while the top petrol engine in the A3 is a new 2.0-litre four-cylinder producing 190hp. While manual transmissions remain the same, the old six-speed S-tronic autos have been upgraded to new seven-speed systems. Diesels are carried over, with the 110hp 1.6-litre TDI still offering 99g/km, and the 150hp 2.0-litre TDI from 105g/km.

Options include Audi’s 'virtual cockpit', with digital instrument display, allowing the driver to configure the screen to prioritise certain information and functions, and display sat-nav map and routes, while still showing the speedo.

The A3 can also be chosen with traffic jam assistance – an autonomous system that allows the car to keep pace with slow moving traffic, working with the adaptive cruise control and S-tronic automatic. In very slow moving traffic, it can also work with the lane keeping assistance to take over steering for short periods when the system can detect the road markings clearly.

The standard smartphone interface is compatible with Apple and Google operating systems, and two mobile phones can be connected when the optional Audi Phone Box is specified, should the driver need to have a work phone and personal phone connected.

Test cars were specified with the S-tronic auto, and the A3 1.6-litre TDI is an exceptionally refined performer. The 1.0-litre TFSI could have some fleet appeal for low-mileage drivers or dieselphobes and was super-smooth for a three-cylinder engine. It’s also capable of achieving 0-62mph in less than 10 seconds. The 150hp 2.0-litre TDI offers a great balance of performance and economy.

It seems that with a recently updated A-Class and BMW 1 Series on the market, the A3 has improved by enough to secure its position as a class benchmark.