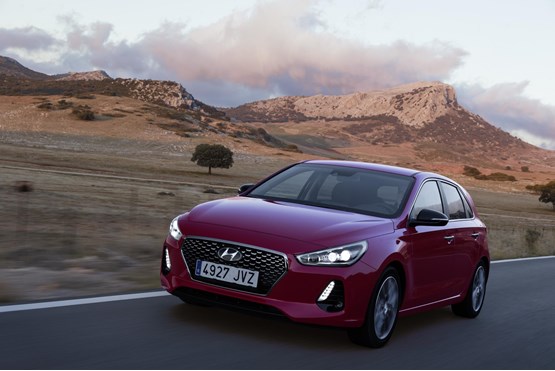 Third generation i30 hatchback has impressive array of safety features as standard and CO2 emissions from 99g/km.

The i30 has come to be seen as a watershed model for Hyundai. The first i30, launched in 2007, marked the beginning of the brand’s transformation from budget-buy into the mainstream.

It was Hyundai’s first European-built model and made huge strides in catching up with rivals for quality, technology and safety.

The second-generation i30 in 2011 was more stylish and better to drive, and has played a key role in the brand’s growth to becoming a serious player in both retail and fleet in the past few years.

Almost 120,000 versions of the first- and second-generation i30s have been registered in the UK.

For 2017, the i30 has evolved into its third generation. It is perhaps a little too similar in appearance to its Kia Ceed cousin to truly stand out, but it was never going to make an impact based on how it looks.

And, as this is the more ‘conventional’ five-door hatchback, there is room in the range for other body styles to be a little more adventurous.

We’ll see an estate version at this month’s Geneva motor show, and a high-performance Volkswagen Golf GTI rival later in the year.

There will also be a four-door version – a derivative that has taken the bulk of sales in the North American market in the previous generation, where it’s badged Elantra – which Hyundai is referring to as a ‘fastback’. This could be marketed as a compact ‘four-door coupé’ such as the Mercedes-Benz CLA, but Hyundai would be targeting an audience seeking to spend less.

So first impressions on what will become a comprehensive line-up of cars are important.

New to the i30 is a 120PS three-cylinder 1.0-litre turbocharged petrol engine, which in UK specification offers CO2 emissions from 115g/km. It is available in S, SE and SE Nav grades (but not the range-topping Premium and Premium SE), and sits alongside a new-to-Hyundai 140PS 1.4-litre turbo petrol engine with CO2 emissions of 124g/km with the six-speed manual gearbox, or 125g/km when choosing the optional seven-speed dual-clutch automatic.

There is only one diesel engine for UK customers – a 110PS 1.6-litre, which has CO2 emissions of 99g/km with the standard manual transmission, or 109g/km for the DCT auto. Hyundai took the decision to restrict the UK range to this single diesel derivative just days before we drove the car on the European media event, which focused on the new petrol engines and a 136PS version of the diesel, which will not be offered in the UK.

Equipment has been boosted for the new model, with the entry level S (a grade only offered with the 1.0T) having standard alloy wheels, LED daytime running lights, digital radio, electric windows all-round, Bluetooth connectivity, USB and aux-in sockets as well as driver’s seat height adjustment.

Impressively, this car also comes with a suite of safety features as standard, which you often end up paying extra for elsewhere.

Lane departure warning, forward collision warning with autonomous emergency braking, lane keeping assistance and hill-start assistance are all here. Only two items are missing: a blindspot warning and rear cross traffic alert are added as standard from the Premium grade.

Having all these safety features as standard works well for fleet safety policies, avoiding the need to pay extra to have these items as options.

SE variants have larger alloy wheels than the S, a five-inch touch-screen, rear parking sensors and camera and a leather-covered steering wheel. SE Nav variants are listed as an equipment grade in their own right, adding a larger touch-screen with satellite navigation as well as wireless phone charging for compatible smartphones.

Our time behind the wheel of the 1.0-litre variant was a pleasant surprise. The turbo provides plenty of low-down torque ensuring the engine’s responsiveness, and the engine noise is well insulated so you don’t get the characteristic offbeat gruffness that used to signal three cylinders under the bonnet.

Diesel would still probably be the preferred choice of fleets in this category, although the running costs and CO2 emissions of the petrol models are low enough to make them worth a look for low-mileage drivers and for cars based in towns and cities.

The smooth nature of the higher-power diesel we tried also bodes well for the 110PS version we get in the UK.

The interior finish is the best of any mainstream Hyundai to date, providing good room and excellent comfort. Luggage space of 395 litres at minimum is also decent for this class.