"As is typical with small cars, the dashboard and door trim is hard plastic, but it doesn’t look too cheap in the Kona. " 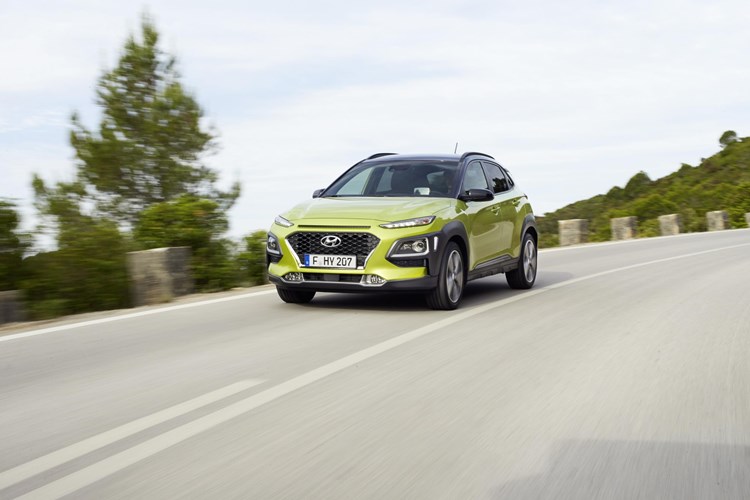 The Hyundai Kona is a compact crossover with enough style to set it apart from the rest of the pack. Simon Harris reports.

Until recently, Hyundai had a car in its line-up called the ix20. Based on the i20, the model had a multi-purpose vehicle (MPV) silhouette, and it competed with similar sized and shaped cars from other brands.

It’s possible there are still some ix20s in stock, but models like these have slowly been disappearing as the market has gravitated toward crossovers and SUVs.

Time was we used to have the ix20, the Kia Venga and Citroën C3 Picasso, but now we have the Hyundai Kona, Kia Stonic and Citroën C3 Aircross. And there are plenty of similar replacement strategies among other brands.

From its appearance, the Kona relies on being more overtly striking, like the Nissan Juke, rather than the more conventional lines of a Vauxhall Mokka X or Seat Arona.

Narrow LED daytime running lights high on the front of the car, chunky plastic cladding over the wheel arches, and a coupé-like, tapering roofline are among the features that make it stand out.

Inside, the story is a little more sober, although the colour-coordinated parts available on the higher models make things a little more interesting.

As is typical with small cars, the dashboard and door trim is hard plastic, but it doesn’t look too cheap in the Kona. It is also roomy for a small car, and quite comfortable.

The range-topping Premium GT grade is only offered with the 1.6T-GDi engine and comes with four-wheel drive and a seven-speed dual-clutch automatic transmission.

It has a safety pack as standard (optional on other models), featuring autonomous emergency braking with pedestrian recognition, rear LED lights and front cornering light function.

It is a little disappointing to see autonomous emergency braking as a £235 option on all but the top model, but specifying it could see the cost offset somewhat by lower annual insurance premiums.

However, the Kona does provide plenty of safety features across the range.

The car is easy to drive thanks to its compact dimensions and elevated driving position, and the perky 1.0-litre three-cylinder engine is a willing companion.

It makes for an agile combination around town, with responsive steering and light controls.

It does feel a little firm over harsh bumps, but this kind of set-up is typical of most compact crossovers, and it certainly isn’t the worst of its type.

Under hard acceleration, you do sometimes become aware of a gruff edge to the engine note – a trait of most three-cylinder motors – but most of the time the engine feels smooth and refined.

The Kona will appeal to those who like to stand out, but it doesn’t sacrifice practicality.

Its smart looks and well-equipped variants should bring more user-choosers to the Hyundai brand.