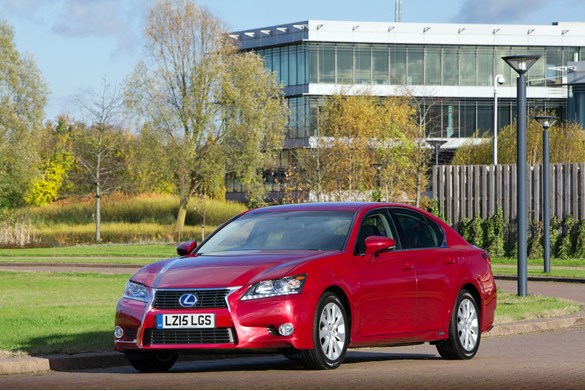 That in mind, it’s almost miraculous that the Lexus GS has such prestige and renown, but it does. And now it’s a bit better, updated for 2016 (four years after its launch) with some design, equipment and safety improvements, all aimed at taking those 450 sales up to a heady 750 in 2016.

Compared with other executive cars, the GS will save the average 40% taxpayer hundreds of pounds per year in benefit-in-kind (BIK) payments alone.

Two models are available in the UK, the 220hp 300h and the 341hp 450h, both petrol-electric hybrids, but we’ll concentrate on the former because it makes up the vast majority of sales – about 95%, in fact.

It mates a 178hp four-cylinder petrol engine to a 141bhp electric motor for a mathematically anomalous 220hp total output. It will transition between electric-only driving and firing up the petrol motor almost seamlessly, which is a testament to the refinement on offer here – at times the GS is as calm and quiet as saloon cars come, at any price.

On smooth roads and with light throttle, external noise is all but eradicated and the GS is a truly luxurious companion: the grumble of a diesel engine is notably absent, the ride quality is supple and the chairs are soft.

The GS is festooned with a CVT automatic gearbox that, when called upon to deal with full throttle, results in an unwavering drone.

And because you’re hauling about an electric motor and battery pack, the weight pressing down into the chassis makes the ride harsh on poorer roads, blunts the handling and sends fuel consumption skyward.

The GS simply doesn’t have the cabin ambience of any German rival. It feels high-tech but without much sparkle, and the point-and-click Remote Touch Interface for the media screen is still horribly counterintuitive and vexing.

Executive Edition is aimed very much at the company car driver and offers the sort of equipment levels that will have a BMW 520d SE driver spluttering out his Costa Express.

Leather and Lexus’s shiny new widescreen navigation system are both standard, which they weren’t with the old SE trim, while pedestrian detection, automatic braking, adaptive cruise control and traffic sign recognition make the cut too. And it’s all wrapped up in a shell that’s been sharpened up nicely, with triple-LED headlamps and a more pronounced grille.

Despite its faults, this car has exclusivity, class-leading running costs, a standard equipment list that shames rivals and a dealer network regarded as one of the best.