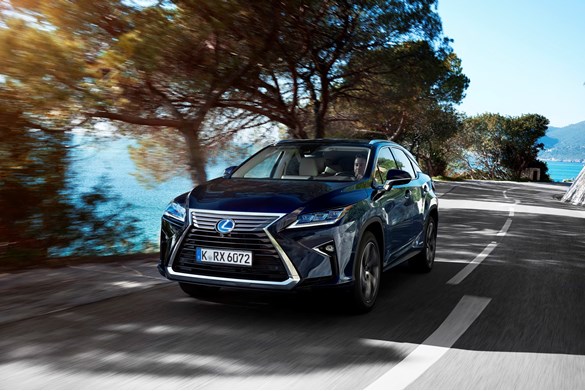 The RX has been a key model in the Lexus line-up since it first appeared in the UK in 2000.

The second-generation model became available as a hybrid in 2005, and soon became the only version of the RX offered in the UK.

The outgoing RX 450h, with CO2 from 145g/km, still outperforms diesel rivals for emissions. The new model, with only minor modifications to the petrol-electric powertrain, is able to achieve 120g/km.

Even with the larger 20-inch wheels of versions above the SE grade, CO2 is 127g/km, making it the only large SUV without a plug to qualify for enhanced writing-down allowance treatment. It also means that, against diesel rivals, annual benefit-in-kind (BIK) payments for a higher rate taxpayer could be as little as 40% of drivers in a diesel Range Rover Sport, and still lower than drivers in an Audi Q7, Mercedes-Benz GLE and BMW X5.

Lexus has decided to introduce a four-cylinder turbo-charged petrol variant to the RX range for the fourth generation. With 235hp, the RX 200t uses the same sophisticated technology as the NX 200t to optimise fuel efficiency or performance when necessary, but with CO2 emissions in excess of 180g/km, it’s unlikely to appeal to many fleets.

The new hybrid range starts with the SE, which features 18-inch alloy wheels (allowing it to achieve 120g/km), digital radio, sat-nav, LED headlights and leather seats, which are heated, ventilated and electrically adjustable. Upgrading to the Luxury grade means the RX has a towing capacity of up to 2,000kg (lower models do without the chassis strengthening features required to add a tow bar, to keep weight down and help reduce CO2). These also have a 12.3-inch touchscreen, and wireless smartphone charger.

The interior, like many other cars in this class, feels luxurious and looks pretty conventional.

On the road, it's a familiar story: excellent refinement, strong performance (although the 200t feels a little sharper), and an environment that seems cocooned from the stress-causing elements associated with driving.