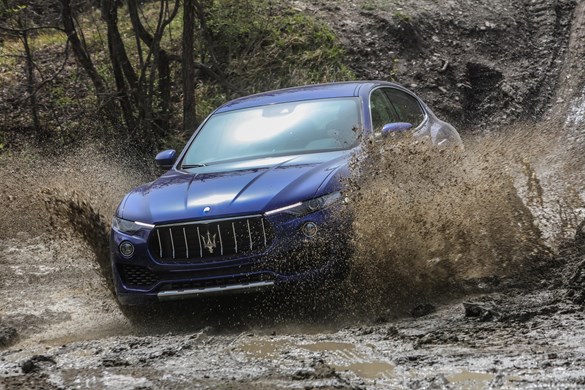 By now we have surely got beyond the idea that sportscar manufacturers shouldn’t be producing SUVs.

It’s almost 20 years since Mercedes-Benz and BMW decided to introduce road-oriented 4x4s, and many others, including Porsche, and more recently Jaguar and Bentley, followed.

Brands with rich heritage in motorsport, can carry it off, and, it seems, make a success of it.

Maserati is about to follow suit with the Levante. The name comes from a Mediterranean easterly wind, and its task is to offer an Italian alternative to high-end driver-focused SUVs such as the Porsche Cayenne, BMW X6 and Range Rover Sport.

The Cayenne was the main benchmark for driving, but the Range Rover Sport is the leader in this category in the UK when it comes to sales. And, although slightly larger, the Levante could be seen as a rival for the V6 diesel Jaguar F-Pace.

Maserati is still a low-volume player in the UK, although it has been engaging with fleets since the launch of the Ghibli saloon in 2014, which also coincided with the brand’s first diesel engine.

That 275hp 3.0-litre engine will be offered in the UK, and could help double Maserati sales to around 3,000. Bosses initially decided against bringing the Ferrari-designed 3.0-litre petrol engine to the UK, but that decision is under review and it could be that both engines are offered by the time right-hand drive cars are ready in late-November.

Maserati has focused on running costs in since the launch of the Ghibli, especially on the diesel version, and although prices are yet to be confirmed we can expect costs to be competitive with rivals on depreciation, fuel and SMR.

The Levante certainly looks part of the Maserati family, with an aggressive looking front end, and a softer, more elegant rear.

The Interior can accommodate five in comfort, although is especially spacious for four. Everything looks and feels like it belongs in a premium car.

The company’s priority with its first SUV was that it should still feel 100% Maserati. The sometimes conflicting attributes of comfort and agility have been balanced by electronically controlled suspension that also varies the ride height of the car according to road conditions. It can be lowered for improved aerodynamics or to reduce the centre of gravity on road, or raised to ensure it clears obstacles off road. The default setting combines enough comfort for most with excellent body control and sharp steering responses.

Essentially the Levante will corner pretty much as well as the Ghibli saloon, but offer the added dimension of go-anywhere ability.
Prices will be confirmed closer to the car’s UK introduction, but somewhere between £53,000 and £55,000 is likely to be the level.