""The steering is light and direct, giving the car an agile feel which makes it enjoyable to drive."" 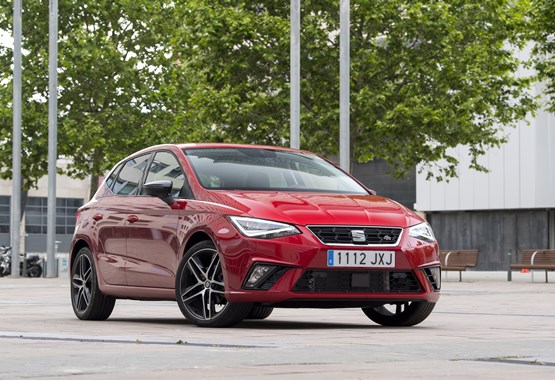 This is proving to be a big year for the supermini sector. Already in 2017 we have seen the arrival of the all-new Nissan Micra, Kia Rio and Suzuki Swift, while a refreshed Toyota Yaris has also gone on sale. This summer will also see the launch of the new Ford Fiesta – the sector’s biggest hitter.

For now, however, the newest model in the market is the fifth-generation Seat Ibiza. Currently available to order, first deliveries will take place at the end of July.

First impressions are good. The Ibiza, already one of the most angular and striking superminis on the road, looks sharper with more sculpted and accentuated surfaces.

Available only as a five-door, it is the first model to be based on the Volkswagen Group’s MQB A0 small car platform, which means the Ibiza is 87mm wider than its predecessor, giving the new model a squat, sporty appearance.

It is also fractionally shorter and lower than the outgoing model, but its wheelbase has grown by 95mm, which means the supermini is more practical than before.

Rear legroom has grown 35mm, while an accompanying increase in headroom (an extra 24mm in the front and 17mm in the rear), makes it much more spacious for passengers.

Boot space has also increased: at 355 litres it is 65 litres larger than before, giving it the most capacity in the sector – just. The Honda Jazz at 354 litres, runs it close.

A 1.6 TDI diesel engine in 80PS and 95PS variants will become available later in the year, while a 150PS 1.5 TSI petrol unit will also be launched.

Until the arrival of the diesels, the most efficient unit in the range is the 95PS 1.0 TSI, which Seat says will also be the most popular.

This produces 106g/km of CO2 and has an official combined fuel economy of 60.1mpg. The 115PS 1.0 TSI matches its economy but has slightly higher CO2 emissions of 108g/km.

SE Technology is expected to be the most popular equipment grade and adds an eight-inch colour touchscreen and navigation system.

At the Ibiza launch, we were able to drive the 1.0 TSI 115PS FR and the positive impression gained from its exterior styling was largely carried through to its interior.

This increased cabin space helps the Ibiza feel large and airy, with comfortable seats (42mm wider than before) and plenty of storage space.

The dashboard design is simple and subdued, with plenty of sharp angles, and it feels well put together.

However, the perceived quality is reduced by some of the materials used: the hard plastic on the top of the dashboard, centre console and door handles means it trails the class best in this area.

This is a shame, as otherwise the interior layout and space give the car a more refined feel, which continues when the car is on the road.

The Ibiza’s suspension does a good job of smoothing out road undulations, while the steering is light and direct, giving the car an agile feel which makes it enjoyable to drive.

Noise levels are kept firmly under control, while the three-cylinder engine revs smoothly and delivers plenty of punch.

Verdict: The new Ibiza is a significant improvement over its predecessor, and can be considered as one of the best cars in its class.