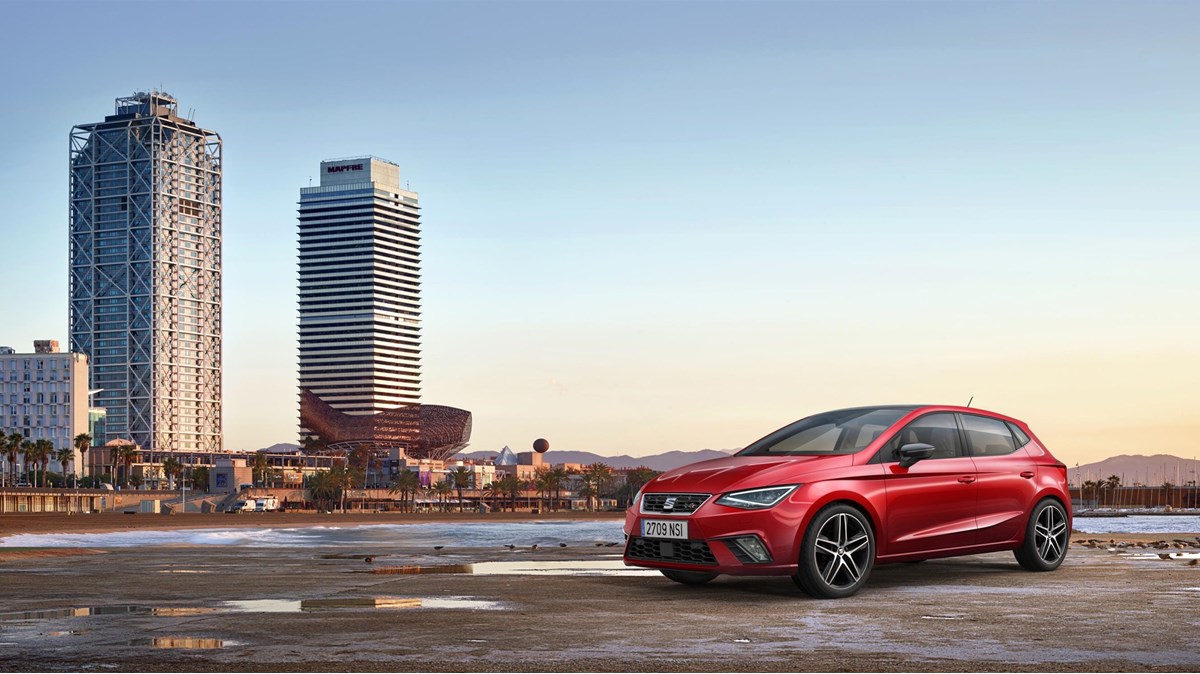 Read more about our experience with the new Seat Ibiza in our long term test review.

The new Seat Ibiza went on sale in July, taking on fierce competition from a range of new models in the B-segment. To succeed it needs to outshine the new Nissan Micra and Ford Fiesta, plus take on the Volkswagen Polo with which it shares a platform.

To help the new car gain traction in the market, the Ibiza is the first car from parent company VW Group to use its all-new MQB A0 platform. It means the fifth-generation Ibiza benefits from the latest technology and engines within the group.

The Ibiza is lighter and 30% stiffer than before, meaning far better driving dynamics along with reduced fuel consumption and emissions. The car has grown in width by 84mm which should provide greater stability.

Seat says the Ibiza is “a completely fresh model that was created with several ambitious goals in mind: to move major steps forward in safety, design, performance and comfort”.

There are four models in the UK line-up: S, SE, FR and Xcellence.

Thomas Schauer, who works on powertrains and chassis at Seat, told Fleet News: “We have a new strategy to offer a luxury version called Xcellence. It has a more comfortable suspension set-up compared with the FR version, which is sportier. We launched Xcellence with Ateca and realised that the market wants this split.”

He also promised the new Ibiza has not lost its fun factor by becoming more functional, saying: “This platform is still very dynamic but it’s also comfortable. There is usability too. The boot volume is increased and now has a flat load floor.”

The Ibiza’s design isn’t revolutionary; it’s now more closely related to the Leon than ever before. It will only be available as a five-door rather than a three- and five-door. However, it retains a sporty character.

At the front, the lines are sharp and triangle full-LED headlamps are fitted along with signature daytime running lights.

In profile the front and rear overhangs are very short, pushing the wheels into the corners making room for larger doors.

A softer approach is taken at the rear, although FR models get twin exhaust tailpipes.

To set Xcellence versions apart from the rest of the range, extra chrome details are included along with unique alloy wheels.

Perhaps the area most in need of improvement was the old Ibiza interior. In the new model, inspiration has been drawn from the Ateca and everything is of a much higher standard.

Technology has been key in the development of the new Ibiza and it features an eight-inch Full-Link infotainment system with Apple CarPlay, Mirrorlink and Android Auto which allows drivers to connect more than one device at a time.

Clever packaging means legroom in the back has increased by 35mm and the boot has been enlarged by 63 litres, bringing its total capacity to 355 litres. This is despite the vehicle being 2mm shorter overall.

There will be three engines available starting with a 1.0-litre three-cylinder petrol TSI with a choice of either 95 or 115PS outputs.

Diesel power will come courtesy of a new 1.6-litre unit, with AdBlue for lower emissions. It will offer either 80 or 95PS.

A larger four-cylinder 1.5-litre petrol engine with 150PS will top the range later in the year.

Schauer admitted the emissions scandal had affected powertrain development at Seat. He said: “We are still working hard to win back trust. We will only launch a car when it’s inside the official tolerances and our internal tolerances are much tighter.”

Official crash test results are yet to be released, but Seat is expecting the Ibiza to achieve a five star Euro NCAP rating.

A number of driving assistance systems that are present in the Leon and Ateca will also be available in the Ibiza. These include Front Assist, adaptive cruise control, keyless entry, front and rear parking sensors and a rear view camera.

When asked about autonomy, Schauer said: “We are working on autonomous driving technology but we don’t want a repeat of dieselgate by releasing this system early, so we will only launch it when it is 100% safe.”

Read our first drive review of the Seat Ibiza here.