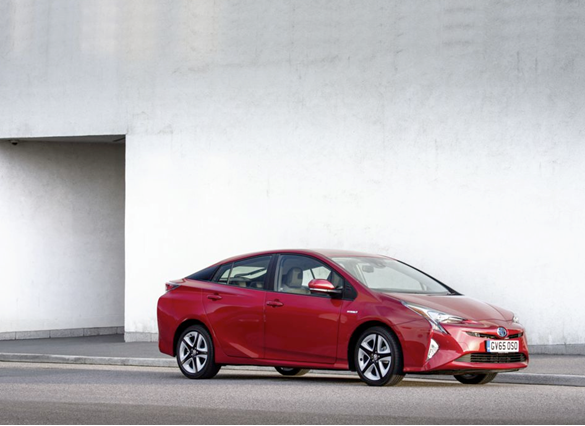 The Toyota Prius has become the hybrid benchmark over the past 19 years.

Originally launched in 1997, the model first came to the UK in 2000 and offered CO2 emissions of 120g/km – the lowest for any four-seater at the time.

The second-generation came in 2004 and improved to 104g/km at a time when conventional family cars still hadn’t got close to 100g/km. The third-generation in 2009 saw this figure reduce to 89g/km, and now – with 15-inch wheels fitted – the latest model is as low as 70g/km.

This is a significant figure for those required to drive in the London congestion charge zone as the threshold for the 100% discount is currently set at 75g/km.

The Prius has always looked a little odd. The original model was a C-segment saloon, which always looked out of place in Europe, anyway. It evolved into an aerodynamic hatchback which, although it had a long wheelbase for a C-segment car, was too narrow and had too little boot space to be a true D-segment car, although Toyota had successfully lobbied the SMMT to classify it as such. And it was certainly priced at D-segment levels.

The new Prius is the most outlandish looking version yet. Perhaps confident that customers who like the concept of a hybrid but would prefer to be seen driving a ‘normal’ car can now choose an Auris hatchback or estate, Toyota seems to be catering for those who want to choose a hybrid that stands out.

It isn’t an unattractive car to my eyes, but it certainly caught the attention of passers-by on our test route and, judging by their expressions, most of them seemed unpleasantly surprised by what they saw.

It has some styling cues in common with the Mirai hydrogen fuel cell car and both are certainly marked out as pursuing an alternative path.

On the road, some enjoyment could be derived from the previous generations of the Prius through the periods of silent running and, perhaps, hitting high fuel economy targets, but they were as far removed from a driver’s car as corned beef slices are from haute cuisine.

But Toyota has gone a long way to address this with the new Prius. The hip point is 59mm lower than before and the angle of the steering column is 20˚ rather than 24˚. The base of the windscreen is also lower to help compensate for this new driving position and the result is that, for the first time, you feel like you’re sitting in the Prius rather than on it.

Double wishbone suspension at the rear makes the car feel more connected with the road and steering feel is also improved. It isn’t in danger of engaging the driver in the same way as a Ford Focus, Volkswagen Golf or Mazda3 will, but it certainly feels like it has more in common with them than before.

Although the total power output of the hybrid system is lower than in the previous model (122hp rather than 136hp), the Prius is more responsive, with a quicker 0-62mph sprint time and a smarter energy recuperation system which allows greater reliance on electric power.

The car is also much quieter when the engine is running and power is delivered in a more refined way.

There are four equipment grades: Active, Business Edition, Business Edition Plus and Excel. Toyota estimates Active will account for 50% of the 4,000 Priuses which are expected to be sold in the UK this year,.

The Prius is a comprehensive package, which provides a great deal of standard equipment and in the right role could help reduce fleet running costs.