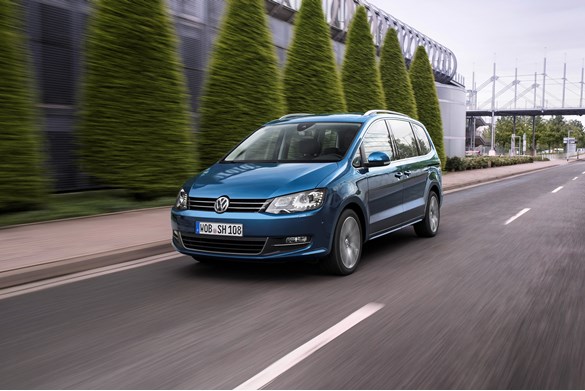 Despite a higher price tag, the Sharan multi-purpose vehicle's efficiency improvements and upgraded driver assistance features will give it a higher value to fleets than the car it replaces, according to Volkswagen UK.

"In pure number terms, the entry-level Sharan is 3% more expensive, which equals an extra £800. But greater economy, along with efficiency that attracts lower benefit tax liability means it is much better value for the business motorist."

At the launch of the range in Germany, she told Fleet News: "This may not be one of our core fleet models, but 68% of the 3,100 registrations it achieved last year went to business drivers and we're convinced the revisions will maintain our presence in an increasingly competitive MPV segment."

The refreshed seven-seater retains much of the style of the current car, which was launched in 2010, along with its sliding door and easy-fold seating systems, but introduces frontal revisions for a smoother appearance, LED rear lights, different wheels and fresh upholstery.

While second looks are needed to spot the subtle styling changes, differences under the bonnet are more apparent and Volkswagen's latest 2.0-litre TDI power unit is smoother at all speeds and claims to be more than 9% more efficient.

Quiet and refined, it is mated with a six-speed transmission that mixes brisk acceleration and a lively demeanour, but despite being almost 10hp more powerful, it offers a significant improvement in tailpipe emissions (130g/km compared with the 146g/km).

Volkswagen's latest vehicle to use the MQB platform feels more nimble than is suggested by its size and handles with confidence while giving its occupants a cushioned ride. Luggage capacity is 300 litres with all seats in position and cargo volume rises to 2,297 litres when all the rear seats are folded.

English says the value proposition gets better with the new Nav version of the SE, "which is our most popular model". For an additional £675, this derivative comes with  additional features that include a media system, chrome roof rails, front and rear parking sensors, cruise control and tinted glass.

The B 200d is a fairly expensive for a small family car and doesn’t offer the outright desirability that SUV models provide, but from a refinement and practicality perspective it arguably has the edge.