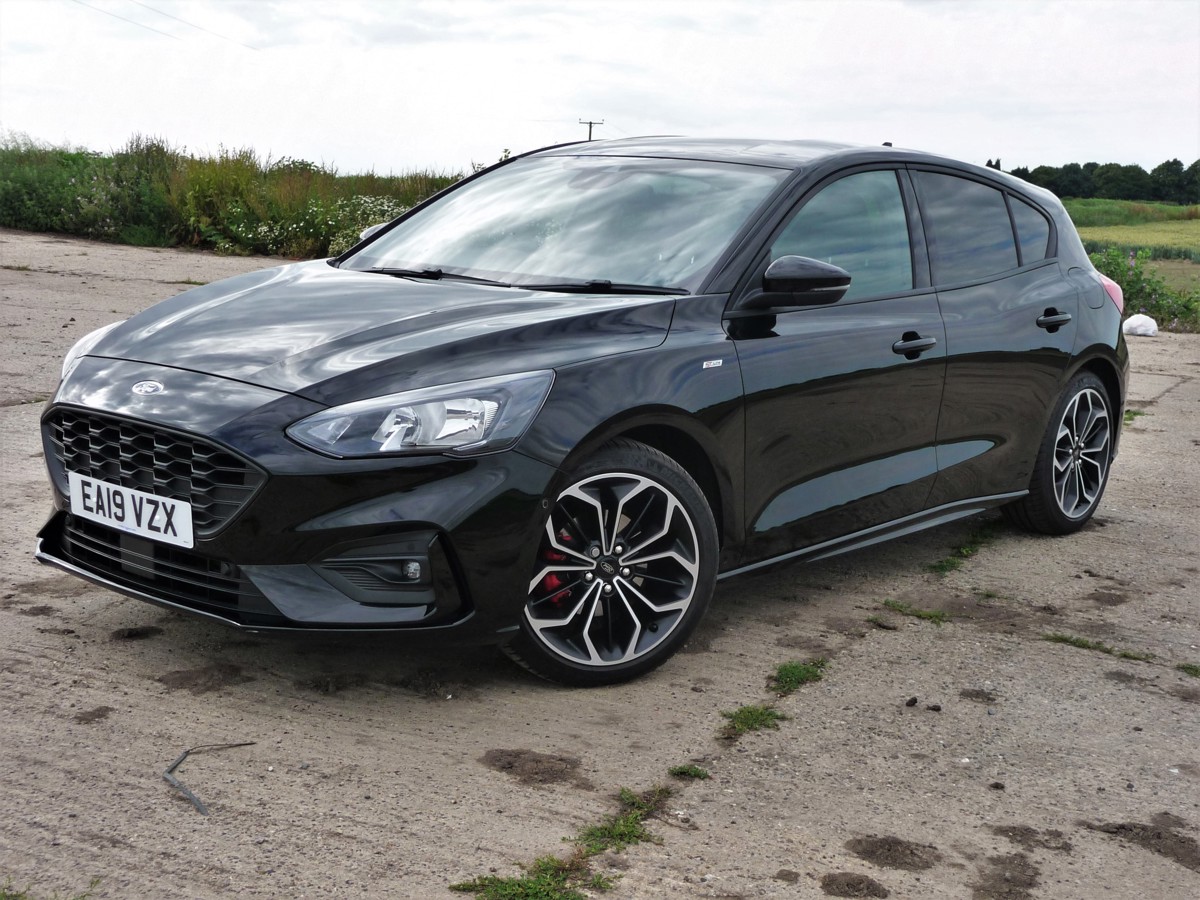 When the keys to our long-term Ford Focus arrived on my desk six months ago, they were accompanied by high expectations.

I was switching into it from the manufacturer’s excellent Fiesta supermini and also had the words of the-then Ford director of fleet operations in my head: “This is the best car Ford has ever built.”

Often a build-up like that is only a pre-cursor for disappointment but, as our loan expires and having driven our Focus for 10,000 miles, this was not the case at all.

This is reflected in the way it drives. Its sports-tuned suspension strikes a lovely balance between dynamic handling and comfort, while its 1.0-litre petrol engine, which produces 125PS and CO2 emissions of 114g/km, provides ample performance. It’s equally at home on motorways or country roads. 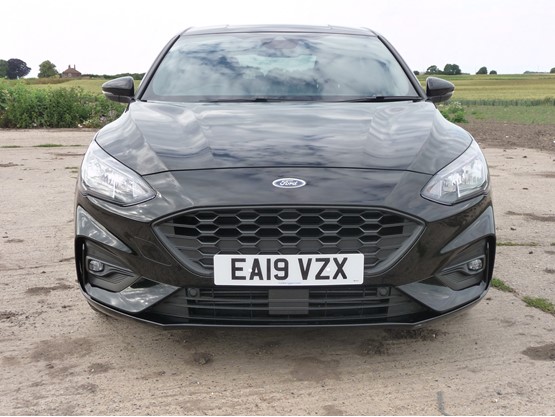 Fuel economy has averaged 47.4mpg, with the model having official figures of 38.7mpg to 52.3mpg.

Its spacious interior is well-built with good quality materials and a number of sporty flourishes, while the dashboard and Sync 3 infotainment system are logical and simple to use.

Other highlights have been its blindspot alerts and its FordPass Connect app.

All in all, there’s a lot to like about the Focus, and very little not to.

Perhaps my biggest complaint is that the excellent reversing camera is positioned above the rear number plate and is prone to be being covered in road muck.

So, is this the best car Ford has ever produced? I haven’t driven all of them so it is impossible for me to say, but in my view, it is definitely the best lower medium car available at the moment.

The new Volkswagen Golf may change this when it arrives in the UK in spring, but, until then, the Focus sits right at the top of its class.

The onset of some wintry weather also heralded the arrival of the first black mark against our long-term Ford Focus ST-Line X: its heating wasn’t working properly.

While its dual-zone air-conditioning was able to pump lovely hot air through the windscreen and cabin vents on the passenger side, all that would come through on the driver’s side was cold air.

This was particularly disappointing as, with its heated windscreen and heated front seats, our Focus was otherwise set to be well-equipped for the winter.

However, the issue did bring one upside: when Ford took back our long-termer to resolve the problem, it loaned us a Focus ST 2.0 EcoBlue in its place. 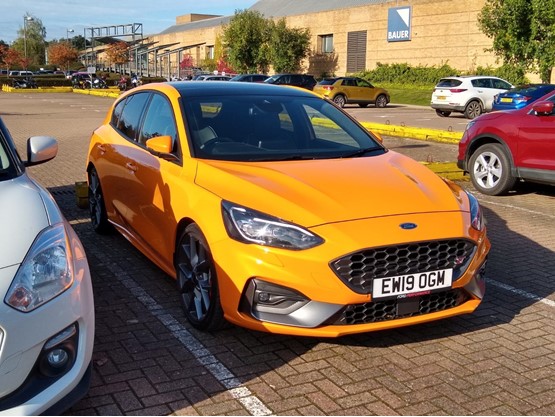 The ST-Line X taps into the trend of offering cars with the sporty looks of performance models but with the efficiency, refinement and comfort benefits of more ‘normal’ trim levels.

This is something our test car does well. It’s fitted with 18-inch alloy wheels, has a full ST-Line body kit and a large boot spoiler, while red brake callipers really set the exterior off.

The interior also features touches such as red stitching on the seats and a dark headlining, while sports-tuned suspension provides a great balance between a sporty driving experience and comfort.

While it would be unkind to describe the ST-Line X as a sheep in wolf’s clothing – it’s much more than that – you couldn’t accuse the ST EcoBlue of taking a similar approach. There is no mistaking the ST’s intentions when either looking at its spec sheet or from behind the wheel.

With 190PS and 400Nm of torque it delivered the performance its looks promised and drives like our ST-Line X but with everything dialled up: the steering was heavier, the ride stiffer and the exhaust note louder.

I really enjoyed my short time with the ST, but for my daily use over an extended time period, I’d probably opt for the more balanced proposition the ST-Line X offers.

A new feature on our Ford Focus sprang into life in the past month – the FordPass Connect app and modem. An in-car notification alerted me that this function was available so, following the prompts on the infotainment system, I downloaded the app and signed in.

This was a simple process involving entering a few details such as the car’s VIN. Now, using the app, I can lock or unlock the Focus, locate where it’s parked and see a range of vehicle data. Sitting at my desk, I can see that it’s done 8,550 miles, it has 435 miles of fuel in the tank, and its oil life is at 56%.

It also allows you to view the owner’s manual, a weather report and local points of interest, as well as call for emergency help, book a service or hire a Hertz 24/7 Ford Transit. It also provides live vehicle data.

It may sound a little gimmicky, but the app has so far proved interesting and useful: perhaps its best moment was when it notified me that the Focus’s tyre pressures had dropped and the tyres needed to be pumped up, which I duly did.

Our Focus is also fitted with a FordPass Connect modem feature which turns the car into a mobile hotspot, allowing up to 10 devices to be connected, with wireless speeds of up to 4G LTE.

This is a subscription service, but at the moment Vodafone is offering a three month or 3GB free trial period, which I intend to sign up to and test before my next long term report.

Ford has also launched a version of the app targeted at small business operators and owners – the FordPass Pro app - which allows businesses to manage up to five vehicles.

Our long-term Ford Focus has come in for some criticism in the past couple of weeks.

Not from me – I’m still very much smitten by the ownership experience – but from a friend.

His criticism? That the eight-inch infotainment touchscreen at the top of the centre console “looks stuck on”.

I can understand where he’s coming from. As in many manufacturers’ cars, the screen is surrounded by a piano black frame so it looks like a tablet, sitting proud atop the dashboard.

However, I disagree with him. Looks-wise, its modern appearance fits in with the rest of the cabin, while from a practical point of view it’s ideally positioned – it means you can see information such as sat-nav directions quickly and easily, taking your eyes off the road for the absolute minimum amount of time.

The ‘stuck on’ appearance also enhances the airy feel of the cabin: if the screen was in the same position but had the dashboard built up behind it, then this extra mass of black plastic could add a claustrophobic feel to the interior. 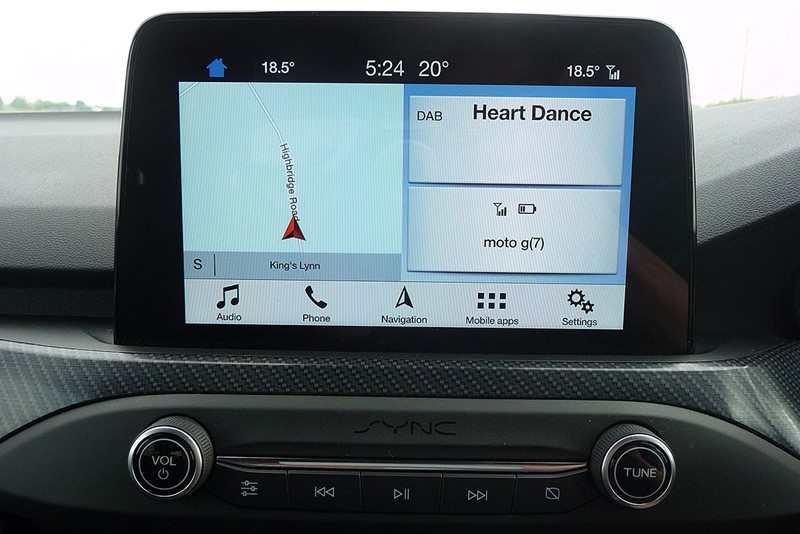 The screen display is sharp with all text and graphics easy to read, making the Sync 3 infotainment system, which includes digital radio, Bluetooth, Android Auto and Apple CarPlay, simple to operate.

The screen is also used by the rear wide-view camera, which is fitted to our test car as part of the optional convenience pack (£500).

All-round visibility in the Focus is pretty good anyway, but the camera, which gives an impressively detailed view in both the light and dark of what’s behind the car, makes parking a much simpler task.

This is fitted to our ST-Line X model as part of the optional convenient pack (£500) which also includes edge protectors and active park assist.

Our test car also features the optional blind-spot monitor with cross traffic alert and braking (£400), which monitors the road behind and either side of the car while reversing out of a parking space.

This has also been valuable, warning of any traffic coming from either side of the car before the driver could see it.

Spacious Focus proves its worth - August 2019

Two months and almost 4,000 miles into our long-term test of the new Ford Focus, and the traditional, new car ‘feelgood factor’ has not dimmed in the slightest: if anything, I’m a bigger fan of it now than when I first took the keys.

It’s continued to be a joy to drive – our ST-Line X model offers a great balance between comfort and sportiness, with the weight and accuracy of both its steering and gearshift particularly impressive.

Its sporty character is further enhanced by the revvy nature and power delivery of its 1.0 EcoBoost 125PS petrol engine.

The three-cylinder unit is also proving to be efficient. So far I’m averaging 48.7mpg, which sits in the middle of the WLTP fuel economy figures of 46.3mpg-49.6mpg.

The past month has also seen the Focus’s credentials as a family car put to the test. My brother and his family came over from Ireland for a week, so it was constantly on the move, ferrying children and adults on various daytrips. All were very complimentary about the amount of head and legroom they had.

One trip saw me take a bike to Thetford Forest for a spot of cycling on the woodland trails, while the Focus also swallowed two golf bags and trolleys when I hit the local links with a friend. 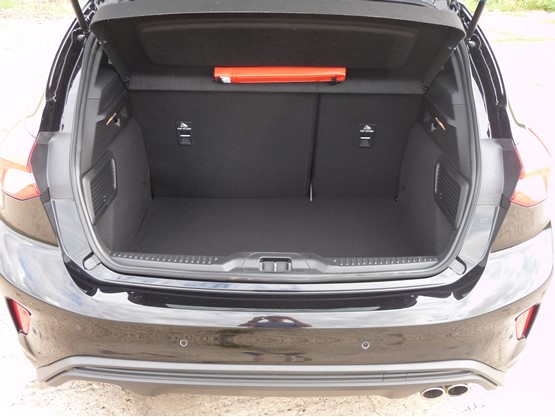 Both occasions saw me fold the rear seats down – a simple procedure, initiated through a lever positioned at the top of the rear seats. The only gripe would be that the slightly high boot lid made loading and unloading trickier than it could have been.

However, this is only a minor point with the Focus continuing to prove that it was a worthy winner of the best lower medium car honour at this year’s Fleet News Awards.

After a very enjoyable spell in Ford’s excellent Fiesta supermini, I’ve recently taken delivery of its bigger brother – the Focus – as my new long-termer.

This sporty image continues in the cabin, with dark headliner, red stitching on partial leather trim and alloy pedals complementing the exterior.

Fortunately from a fleet and company car driver’s point of view, it’s also efficient. Powered by a 1.0-litre Ecoboost engine producing 125PS, our Focus offers official WLTP fuel economy of 46.3mpg-49.6mpg. Over the first 1,000 miles of its time with me, it has averaged 48.9mpg.

So far there’s been plenty to commend our Focus for – I’m looking forward to finding out if this continues for the next six months.