"Ford’s decision to opt for the Mustang badge for its first EV raised some eyebrows, but it could be a masterstroke." 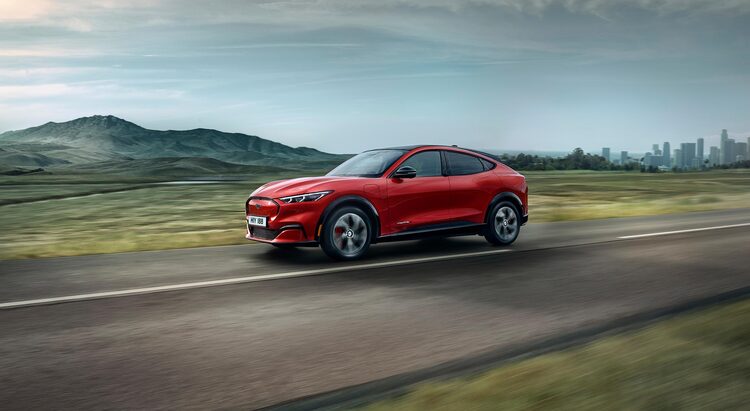 Ford has badged its first all-electric car a Mustang, generally regarded in the UK as an American muscle car, but now intended to be a flagship for its latest technology.

The new Mach-E SUV paves the way for a rapid roll-out of electric product over the next five years resulting in every Ford car becoming full-electric or plug-in hybrid by 2026, while every van model will have an electrified option by 2024.

Frustratingly for Ford, the new Mach-E’s starting price of £40,295 falls outside the revised qualifying criteria for the plug-in grant (PiCG), which has dropped from £50,000 to £35,000. However, Ford is confident that strong residuals and low maintenance costs will keep the total cost of ownership competitive for UK business, while drivers enjoy 1% BIK for the 2021/22 tax year, rising to 2% for the subsequent three years.

Built on a new platform, the Mach-E comes with two battery options: 76kWh, offering range of up to 273 miles, and 99kWh with up to 370 miles, giving it one of the most generous distances of any model on the market.

The entry-level car is the 254PS 76kWh; the step up is the 281PS 99kWh Extended Range costing just short of £50,000 (presumably priced with the previous PiCG threshold in mind). The all-wheel drive option, powered by dual motors, comes at a premium of around £6,000.

Inside, the car is spacious for five adults with a decent boot capacity, plus bonnet storage for the charging leads. An oversized 15.5-inch portrait multimedia touchscreen, seemingly beloved of the new gen of EVs – in particular, Tesla – dominates the dashboard, but does mean that key information is easily accessed.

The Mach-E exudes its Mustang heritage with muscular face, slender headlights, bulbous bonnet and a swooping roofline giving an imposing presence on the road. It certainly turns heads, among teenagers and the middle-aged alike. What it doesn’t have is the V8 roar, but Ford does offer an option to select a propulsion sound drive mode which plays engine notes via the speaker system. It seemed a little pointless to us – one benefit of EVs is the relaxation offered by the silent electric engine.

Surprise-and-delight features include the door handles – well, lack of door handles. Instead, you press a button in the B-pillar to spring the door open by a few centimetres, allowing you to grab a small fin protruding from the frame to pull it fully open. It’s a joy to use.

With a 0-62mph time of 6.3 seconds, this is clearly a potent car. Handling is decent, though not quite as sharp as Ford’s finest examples, with plenty of grip and minimal body roll.

Arguably of greater interest to companies and drivers are the efficiency levels. Fully charged, this test model has an official range of 248 miles; our car displayed 224 miles with 100% charge. The discrepancy comes down to the use of electrical equipment and previous driving behaviour, which are factored into the indicated range, as is the external temperature – it can reduce range by up to 15%. This can then be extended through regenerative braking which returns potentially wasted energy to the battery.

It can take some getting used to, especially for low-speed manoeuvres, although different levels of regenerative braking can be selected. However, used well, it can mean driving without ever braking, so-called one-pedal drive.

On a 115-mile round trip to Cambridge, I only touched the brakes once; everything else was performed using the regen braking which brings the car to a complete stop. The journey used 148 miles worth of charge, leaving the car on 76 miles – reported as 42% charge remaining. That equates to 181 miles at 100% which suggests that, despite driving conservatively and keeping to the speed limit, more practice is needed to extend the range.

That said, the journey was in the default Active mode, rather than the efficiency Whisper (yes, really) mode. A third option is available for out-and-out performance – Untamed.

A key figure to monitor for efficiency on electric vehicles is miles per kWh. The Mach-E’s computer showed 2.7 for the previous 250 miles, which included the delivery driver’s journey to drop off the car. Target range for winter driving is 3.5-4hWh; in summer, drivers should be aiming for 4-5kWh.

When range is nearly depleted, the Mach-E is capable of recharging from 20-80% in just 30 minutes at a 150kW rapid charge point. Empty-full charging on a 7kW home charger is 11 hours (or 23 miles range per hour), reducing to seven hours on a 22kW charger (35 miles per hour).

Ford’s decision to opt for the Mustang badge for its first EV raised some eyebrows, but it could be a masterstroke as the Mach-E faces off against premium rivals. It is refined, stylish, well finished and has bags of appeal, deserving consideration on the company choice list.