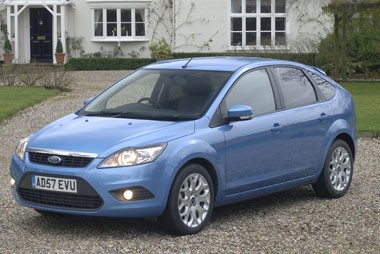 An introduction to the Ford Focus probably isn’t needed. Since it was first introduced in 1998, it’s been as smash a hit for Ford as smash hits can get, rarely out of the top three of the fleet sales charts and shifting more than one million units in the UK alone.

Lauded for the daring styling of the first incarnation, 2005’s mark two was relatively dowdy, although the superb handling and practicality of the original model remained.

Now, 10 years after it was first introduced, the Focus is getting a facelift and a few choice tweaks aimed at keeping it towards the top of the hatchback pile.

Where the outgoing Focus looked dull, this one has the latest Ford face, as seen on the new Mondeo.

It makes a huge difference – this is most handsome Focus so far, and it looks as good as it drives.

Although the new car costs £250 more than the outgoing Focus, ESP is now fitted as standard rather than being a £250 option.

Under the surface not a huge amount has changed, with Ford adopting the philosophy that if it ain’t broke, don’t fix it.

More has changed with the model hierarchy.

The Ghia trim is no more, and the restructure range now comprises Studio, Style, Zetec and Titanium.

The Zetec is expected to be the best seller for fleets. It features standard 16-inch alloys, sports suspension and sports seats, the wonderful Quickclear heated front windscreen and a rear spoiler.

While two 1.6 TDCi diesel engines – with either 88 or 108bhp – will appeal to businesses, none were available to test at the time Fleet News went to press.

From standstill, 62mph arrives in 10.8 seconds and should you find a long enough stretch of private Tarmac, you can reach 118mph.

With 207lb-ft of torque the engine pulls well enough but steadfastly refuses to be hustled. It’s pretty noisy in the first three gears, but quietens down in fourth and fifth, allowing for a more serene motorway cruise.

It also requires a sustained pump of the right foot to gather revs.

The Focus has always handled well, and little has changed. Ford’s engineers know when they’re on to a winner, so there are no dramatic new features to the driving experience, just refinements to make an already excellent car even better.

The small criticisms that could be levelled at previous models are being gradually ironed away.

This latest incarnation is fun to drive, practical, economical and good looking.

The Volkswagen is the cheapest, and comes with 15-inch alloys, climate and cruise control. The Civic’s alloys are an inch bigger and it is the most powerful car here with 140bhp. The Focus also has 16s, while the least powerful Astra at least has 17-inch wheels and sports suspension.

All the cars here fall into the same 18% tax bracket, but the Golf is fractionally the greenest car here. It will cost £53 a month in company car tax for a 22% taxpayer, with the Civic costing £1 a month more. Both the Astra and the Focus carry with them bills of £55 a month.

The Volkswagen Golf is the cheapest to service, maintain and repair over its fleet life, mainly thanks to its variable service intervals. Both the Ford Focus and the Honda Civic require a service every 12,500 miles, while the Vauxhall Astra can last 20,000 miles without being taken to the garage.

With combined fuel economy of 56.5mpg, the Volkswagen is the most frugal, costing just under £5,300 over 60,000 miles. Close behind are the Astra and the Civic, with identical mpg figures of 55.4. The Focus is fractionally the most expensive to fuel, reaching 54.2.

The prestige of the Volkswagen badge and a CAP RV of 40% mean the Golf holds on to its value very well. The Civic also performs well with an RV of 38%, but the Ford and Vauxhall cannot compete on residual values, with RVs of 35% and 28% respectively.

The Volkswagen is easily the cheapest to run of the quartet, costing almost £1,000 less than the Civic over a three-year/60,000-mile fleet life. It is the cheapest in every aspect of fleet management. The Focus is a great car, but costs nearly £2,000 more to run than the Golf.

While the Focus is well specced and the most enjoyable to drive, nothing can touch the Golf for costs. OK, it has fractionally less kit than the other cars featured here, but it’s hardly spartan and offers the prestige of the Volkswagen badge, great residuals, an economical engine and good value for money. The Civic is also a quality car, and outperforms the Focus financially, but it can’t beat the Golf.