FORD is hoping a fresh pricing strategy will help it to steal a march on arch-rival Vauxhall when the Focus Coupe-Cabriolet goes on sale next year.

On-the-road prices for the new addition to the Focus range have been set to undercut every version in Vauxhall’s Astra TwinTop range, with savings of between £200 and £855.

And while large fleets can still expect to receive discounts, smaller operators and owner-drivers may well benefit from a new pricing strategy from Ford.

Ford of Britain chairman and managing director Roelant de Waard said: ‘Traditionally, we have started our prices at a high point to allow for discount to be added into the equation. But with value pricing, we’re taking away the need for the haggling process as well as acting to improve on our residual values.’

de Waard added: ‘I believe value pricing has the potential to reduce tax bills for company car drivers. The design of the CC makes it an acceptable year-round alternative to the regular corporate car because it offers reasonable four-seat capability with decent boot space.

‘Our sales performance year-to-date shows that we have widened the gap between Ford and Vauxhall even though the new car market is down by around 4%.

‘Obviously, I’m happy about that. It shows that we are doing everything right at the moment as far as our biggest competitor is concerned, but while I take Vauxhall seriously, I don’t feel dominated by them.

‘I am equally interested in all the new entrants to the market that target Ford. A percentage point taken from them is as good as one achieved from either Vauxhall or Volkswagen.’

‘As the market continues to fragment, it is increasingly important for us to be present in all sectors, and even though we now have seven versions of the Focus, we will reveal another concept from this platform – an SUV – at the Paris Motor Show.’

Based on the underpinnings of the four-door Focus saloon, the Coupe-Cabriolet allows adequate space for four adults and the design of its two-piece, retractable hardtop provides class-leading luggage space.

It takes just 29 seconds for the roof to be lowered at the touch of a button, and manufacturing it in two sections rather than three is claimed to free up additional space to allow extra shoulder room for rear-seat passengers.

Dealers will begin taking orders for the CC next month, but deliveries are not due to start until January.

Britain will account for 5,500 of the 20,000 examples coachbuilder Pininfarina has been contracted to build next year but Ford expects less than 20% of sales will be to UK fleets. 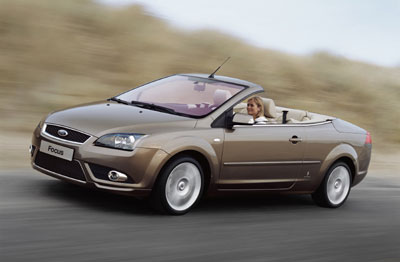 As yet there are no plans to introduce the 225bhp turbo engine from the Focus ST.

IT’S just as well that Ford manual transmissions still feature slick gear changing, because a lot of it is needed to get the best out of the 2.0-litre petrol engine in the CC.

Quiet, smooth running and fine for ambling about town, the engine feels weak when shown a hill and needs to be kept spinning at over 3,000rpm to give of its best.

By comparison, the 2.0-litre TDCi turbodiesel is a dream, with plenty of low-down torque resulting in considerably less use of the gear lever. Undoubtedly the pick of the bunch, the diesel is the best for serious motoring and has a high sixth ratio allowing subdued and refined motorway cruising at little more than 2,000rpm.

Though it has excellent width, the rear seat is still best suited for child-size occupants, but in every other respect, the CC scores highly and effective wind deflectors ensure life in the cabin remains unruffled at 70mph with the top down.

Featuring the best-executed fascia panel yet from Ford, the car has fine detailing and a quality finish. Like other Focus models, ride and handling are superb.

FORD might be late to the open-top party, but the Focus CC is a classy package which has success stamped all over it. With pricing to undercut its chief rival – Vauxhall’s Astra TwinTop – it also makes financial sense. Pity the car isn’t available with the ST’s 225bhp engine, though.