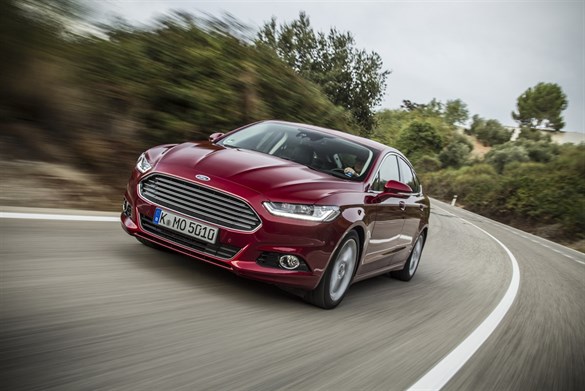 Under the company’s ‘one Ford’ global strategy new models are developed to sell in multiple markets, and the new Mondeo has been on sale in North America and Asia as the Fusion.

Soon after its appearance at Paris two years ago, Ford announced it would be closing the factory in Belgium that built the current Mondeo.

Ford’s Valencia plant, where the Kuga and Transit Connect are also built, was required to accommodate the new model.

While the old Mondeo was soldiering on, the D-sector has advanced with the introduction of a new Mazda6, followed by a revised Vauxhall Insignia, both of which set new benchmarks for low CO2 emissions.

A few tweaks in summer 2013 made the best-selling Mondeo 2.0 TDCi more competitive on emissions and fuel consumption, while the arrival of high-value Business Edition models on both Zetec and Titanium equipment grades, adding sat-nav, Bluetooth and parking sensors as standard, helped maintain the car’s appeal in its seventh year on sale.

At last Ford is ready to launch the fourth-generation model, and on paper at least it looks to be competitive.

Engine upgrades mean the lowest CO2 emissions are 94g/km (on the 115hp 1.6 TDCi Econetic hatchback – estate: 99g/km), while the 2.0 TDCi offers better performance than before as well as lower emissions.

Most Mondeo sales will be to fleet customers, and although a single variant of the smallest diesel engine offers lower than 100g/km, all other 1.6 TDCi models are all above 100g/km.

The good news for company car drivers is there are Econetic versions of the 2.0 TDCi, offering 107g/km in hatchback form whether 150hp or 180hp versions are chosen. Non-Econetic hatchbacks using the manual gearbox are at 115g/km, while adding the Powershift dual-clutch automatic takes CO2 up to 125g/km.

CO2 emissions for estate versions are marginally higher than for the hatchback, but often fall into the same BIK tax band.

Ford is also offering a petrol-electric hybrid version of the Mondeo for the first time. The only saloon version in the UK line-up, it has CO2 emissions of 99g/km, has a total power output (engine and electric motor combined) of 187hp, and is priced at the same level as the 150hp 2.0 TDCi Titanium auto. It might be tempting for a few urban-based fleets and drivers, but Ford expects it to take a 3% share of UK sales.

Ford has been selling a high proportion of top grade models during the last few years and this has been evident on the Mondeo. Ford expects more than half of the new model will be chosen in Titanium and Titanium X variants, and has worked with RV forecasters to ensure equipment levels are carefully selected to improve residual values and reduce whole-life costs.

Although in our comparison table the Mondeo is more expensive in the pence-per-mile figures, the Econetic version would reduce fuel and tax costs, while the Titanium X has more standard equipment than the Vauxhall Insignia Elite.

Ford also expects to reduce the amount of Mondeos sold into daily rental, and increase the number supplied to the true fleet sector.

On the road in the 2.0 TDCi 180 and the Mondeo felt every inch a new model rather than one delayed by two years.

It has even more interior space – something its predecessor also scored strongly on – and is more refined. The quality feel of the interior is a match for anything else available in the sector, and good enough to challenge those pesky premium badge cars that have been making it far more difficult for the mainstream brands to sell upper-medium cars.

The 180hp diesel engine is hushed, smooth and responsive, and will pull strongly as long as you have at least 1,500rpm on the rev counter. Unlike the previous Mondeo, the new model comes with electric power steering rather than hydraulic. While this has resulted in a little less feel than before, it is no less precise, and like all modern Fords the Mondeo is fun to drive on challenging, twisty roads. The benefit of switching to electric steering has resulted in improvements in fuel consumption, and has allowed ford to offer enhanced parking assistance and lane-keeping assistance features.

The ride is also superior to other cars in this class while the Mondeo also has improved body control in sudden manoeuvres at higher speeds. On balance, it’s a better drive than its predecessor despite sacrificing a little steering feel.

Next year will witness the introduction of more Mondeo variants, including a 125hp 1.0-litre Ecoboost petrol (adding to the current 160hp 1.5-litre, 203hp 2.0-litre and 240hp 2.0-litre petrol models), a four-wheel drive diesel, a high-performance 210hp diesel plus the high-specification Vignale models.

While the 2.0-litre diesel versions available now will remain best sellers, it shows that despite participating in a sector that has declined for many years, Ford is offering a complete range of models, and has once again set its sights on the Mondeo regaining a spot in the top 10 sellers in the UK.