"We’d safely say it’s one of the sweetest handling small SUVs on the market right now." 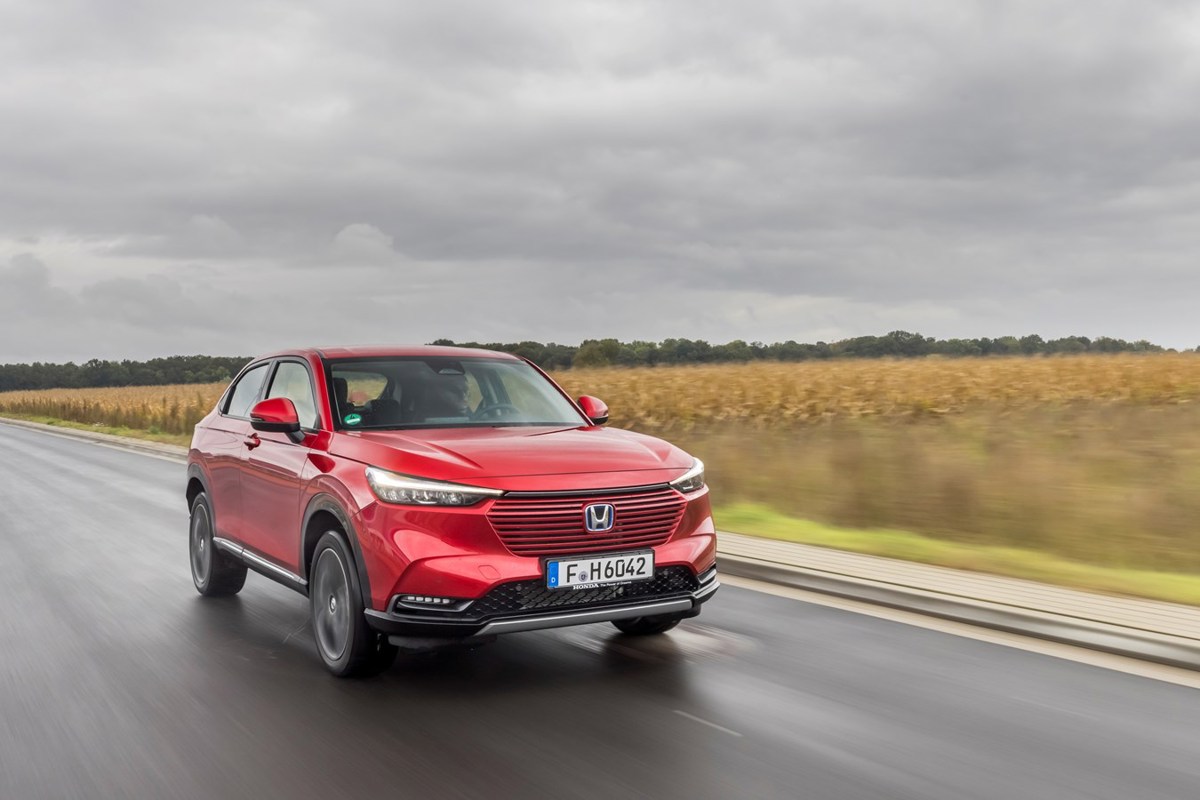 Honda has completely refreshed its compact SUV, the HR-V. It’s now only available as a hybrid as the brand moves to make all its models electrified by 2022, and this latest HR-V values simplicity and practicality over everything else.

Honda says the first demonstrators will arrive next month, with the first customer deliveries in the first months of 2022. In the UK, there are three HR-V variants – Elegance (starting at £26,960) is well-equipped with a nine-inch infotainment system, heated front seats, keyless entry and start and parking aids; Advance (from £29,210) includes a clever air diffusion system that blows air around the car rather than directly at the occupants, a heated steering wheel, wireless phone charger and hands-free tailgate; Advance Style (from £31,660) is all about visual upgrades.

Inside, you sit high looking through a short windscreen and at a well-organised dashboard. There’s a new-generation infotainment system similar to that originally found in the Honda E, which is high up in your eyeline and the partanalogue, part-digital instruments are easy to read, if a little plain.

The top half of the dashboard makes use of high quality, soft padded materials and a thick-rimmed steering wheel. That material quality lowers the further down you look – the centre console is trimmed in very scratchy plastics. There are plenty of storage cubbies, including good-size door bins and spaces for phones and similar small items below the infotainment screen.

Rear space is impressive, with only headroom for the tallest of adults being affected ever so slightly by the HR-V’s sloping roofline. Honda’s Magic Seats allow you to flip up the seat bases so you can stand tall things in the rear footwells, but the boot’s 316-litre load area is paltry, even compared with the form-over-function Vauxhall Mokka or Nissan Juke – despite the Honda being around 300mm longer than both of these rivals.

That hybrid powertrain is shared with the Honda Jazz, albeit with a modest power boost. That means there’s a 1.5-litre petrol engine, a battery pack and two electric motors driving the front wheels. A total of 131PS is available, meaning a 10.6sec 0-62mph time, a fuel economy claim of 52.3mpg and CO2 emissions of 122g/km.

It’s not very fast, but the hybrid powertrain works best in town – utilising instant acceleration from the electric motors. There’s a completely seamless transition between electric and engine power, too. But there’s not a great deal of difference between the economy, normal or sport drive modes.

However, that fuel economy figure is easily achievable, along with Honda’s claim that the hybrid system in the HR-V ‘achieves a higher proportion of electric drive time’ than other hybrids. We managed 53mpg during our test – better than the combined claims – and that’s with us accelerating hard on some twisty country roads in sport, as well as coasting through sleepy towns and motorway driving in eco and normal modes.

The biggest disadvantage is how loud the engine is when you really want to accelerate; even slight inclines wake it up and, if you want to maintain your speed, the engine emits a loud groan.

But, the HR-V makes up for this in the way it drives. It feels assured and solid on the road, with impressive ride quality regardless of the road surface. We’d safely say it’s one of the sweetest handling small SUVs on the market right now.

The HR-V, then, will really appeal to those looking for a user-friendly and low cost fleet family car.