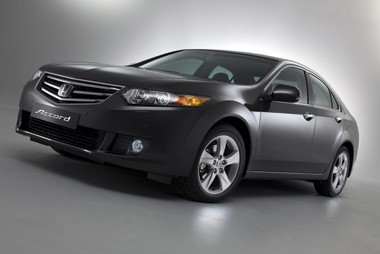 “I didn’t realise there was a new one out,” said a visitor to my house the other day. “It looks quite nice.”

Hardly Jeremy Clarkson in the volubility of his opinions, but the new Accord doesn’t really inspire wild surges of opinion.

For some, they can barely spot the difference between the new one and its predecessor and this will always be a problem for Honda when trying to get people excited about it.

I can’t claim to have some finely honed aesthetic sensibility, but I think it looks very different, and much better too.

The designers have obviously worked on the same proportions but around those ratios the detail and attitude of the new Accord is entirely different.

The steely metallic grey in which our test car was painted added to its already confident, muscular look.

It looks like it should smell of Brut. I love it.

But will it attract company car drivers out of their BMWs and Audis?

We’ve seen brands trying to go up against their ‘superiors’ with more equipment, more space, more value for money. And we’ve often seen that fail.

It needs a good car to pull it off.

The Accord is certainly that in many ways but for me it falls down in one particularly important area – the dash is a mess.

In trying to recreate the feeling of space age techi-ness that worked so well with the Civic, Honda has got itself in a right old twist.

The dash heaves and bulges at you like some primeval volcanic swamp rendered in plastic.

Huge knobs burst through the surface while other areas are covered with the acne of a multitude of unattractive buttons.

This isn’t a premium brand look. It’s far too try-hard.

It’s a shame because it’s not poorly made, and the rest of the cabin is fine. In fact, the seats are as comfortable as you will ever find in a car.

The new fully Euro 5 compliant 2.2-litre i-DTEC diesel engine is obviously its major seller and output of 147bhp gives it an adequate turn of speed.

At slower speeds, it is a bit rattly though, but it smoothes out after 2,000rpm, while the gearchange is lovely. Clicky and precise, just as Hondas should be.

The driving experience is good too. In fact, the more I drive the Accord the more one word seems to sum it up: composed.

It feels composed when travelling at speed, soaking up bumps with a settled confidence. Through bends, it sits flat and secure, never feeling at the mercy of forces such as braking, accelerating or changes in the road.

I could imagine being very contented in this car over many thousands of miles. But at this level, should I be delighted rather than contented?

The competition doesn’t come much stiffer than this: the newly revised BMW 3 Series, the latest Audi A4 and the Volkswagen Passat.

The Accord scores well on equipment levels and space: it is bigger and has part leather seats, as well as the body kit driven macho lines.

As usual, the BMW leads the way when it comes to emissions.

Audi has managed to close the gap with the new A4 though, so they sit in the same tax band, while the Accord’s combination of decent emissions levels and lower P11d price puts it right in the mix.

The lowest is the BMW thanks to its service inclusive package, but the Passat is not far behind, at only £222 more expensive over three years/60,000 miles.

The A4 is more expensive, coming without a support package to mitigate against premium service rates, while the Accord holds a safe middle ground.

There is no surprise that the 318d has the lowest fuel cost.

The poorest here, the Passat, still averages 47.9mpg on the combined cycle. Again, the Accord occupies the middle ground.

While the new BMW 318d has benefited from a positive bounce compared to the old model, it has not been by much.

The A4 looks a very strong proposition.

The Accord comes second but would need only slight improvements to be up there.

The Passat struggles at the higher end of its effective price range.

The big shock is the 3 Series: poor residual value predictions have hamstrung it.

It is clear that the new Accord can certainly compete very strongly in this sector, just as Honda claimed it would.

The Passat looks a little out of its depth, and would be much more competitive, and is probably unbeatable when the front end price moves under £20,000.

Its superb fuel economy and low SMR costs keeps the 3 Series just about in the hunt despite those RV predictions, while the A4 looks a very strong package indeed.

In the end, despite its high equipment levels, we feel the Accord just loses out to the classy and competitively priced Audi.