HOW often do we see the phrases ‘class-leading’ and ‘Korean manufacturer’ in the same sentence?

All right, there are some instances when it can be applied to list price or value for money or one or two less tangible areas that might be important to private buyers.

But how about: ‘The Korean manufacturer has achieved class-leading carbon dioxide emissions from its common rail diesel variant resulting in low benefit-in-kind liability for company car drivers compared to mainstream rivals.’?

And the above statement isn’t the spun marketing blurb from a press pack or brochure – it is based on cold facts.

The Korean manufacturer in question is Hyundai and the car is the new Tucson, which is being targeted at drivers of the Toyota RAV4, Suzuki Grand Vitara, Mitsubishi Shogun Pinin, Subaru Forester and low-end versions of the Land Rover Freelander.

The Toyota RAV4 2.0 D-4D, along with the more powerful Nissan X-trail 2.2 dCi, have long ruled the roost for carbon dioxide emissions in the diesel SUV sector with 190g/km each. Now, the Tucson, which is not significantly less powerful than the RAV4 diesel, rumbles in with CO2 emissions of 187g/km.

A company car driver in the Tucson 2.0 CRTD GSI paying tax at 22% would have a monthly tax bill of £75 for the remainder of this financial year, compared with £89 a month in the five-door Toyota RAV4 XT2. As well as the diesel, the Tucson will be offered with the 2.0-litre variable valve timing petrol engine and the 2.7-litre V6 from the Hyundai Coupe.

And it isn’t just diesel where the Tucson scores well for BIK liability. For those who prefer petrol, the 2.0-litre also proves a winner. If you take the entry level Subaru Forester 2.0 X, with respectable CO2 emissions of 204g/km and a P11D price of £16,247, it results in a monthly BIK bill of £77 per month.

The Tucson is the third four-wheel drive car in Hyundai’s UK line-up and will prompt a move upmarket for the larger Santa Fe, while the heavy-duty Terracan intends to mop-up former Isuzu Trooper and Vauxhall Frontera drivers now those cars are discontinued.

The Tucson is the first Hyundai to come with six airbags as standard, and there is standard traction control to help prevent unruly handling.

Entry point in the range, the 2.0 GSI, is priced at £14,995 on-the-road and all models are backed by Hyundai’s unrivalled five years/unlimited mileage warranty. Diesel versions add an extra £1,000 to the price and an optional automatic transmission on the diesel adds another £1,000.

CDX models, for an extra £1,200, add leather seat facings with heated front seats, climate control in lieu of air conditioning, heated door mirrors, cruise control and an auto-dimming rear-view mirror. Metallic and ‘Mica’ paint are optional but going for leather in a GSI at £1,400 really isn’t worth it because choosing the CDX is cheaper. Smartnav satellite navigation is also available for £695.

The 2.7 V6 is only available as a CDX with the four-speed automatic transmission. Hyundai believes it will sell a total of 3,500 Tucsons in the UK in a full year. If Hyundai can get the message to user-choosers that this is a real alternative to mainstream small MPVs, and draw attention to its strong case for BIK, perhaps they would be able to sell a few more.

WITH a more conventional looking exterior than the Terracan or Santa Fe and a more manageable size, the Tucson should certainly have broader appeal than either of its siblings.

Plastic cladding protects the lower portion of the car, ensuring it looks capable of tackling the urban and suburban jungles and the interior is well thought out although the vast expanse of grey plastic dashboard is a little unimaginative. If it were broken up with two-tone colour scheme, it would be a far more pleasant environment.

However, CDX models are lifted by the addition of metallic-effect plastic surrounding the controls at the centre of the dashboard. GSI models do without the leather seat facings in the CDX. The seats are covered in a heavy-duty cloth which reminds me of the upholstery I experienced when I travelled on a coach for school outings as a child. Not that pleasant to touch, but relatively easy to keep clean. 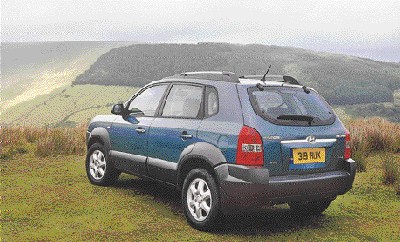 The interior seems roomy for what is quite a compact SUV and the tailgate offers the choice of either opening fully to access the luggage compartment, or flipping the rear window.

The GSI diesel will have more appeal for user choosers with its 40mpg potential and lower CO2 emissions and it is a pleasant car to drive with a short and sweet five-speed manual transmission and a quiet engine.

All Tucsons suffer from an over-firm ride that never really seems to settle on anything less than a perfect road surface. And the steering is geared for those occasional off-road excursions so the wheel is never snatched from your hands when the wheels hit a rut.

However, it is relatively nimble when it needs to be and is among the best of the pretend off-roaders when it comes to on-road performance.

Our test drive included a short off-road course which included soft sand and an angled ramp on which the Tucson could almost balance on two diagonally opposite wheels. It never gave any cause for concern, with decent ground clearance and traction. The 2.7 V6 never really feels as powerful as you expect, but is quiet and refined. Unless you have a real aversion to diesel the 2.0 CRTD is the one for those with large fuel budgets.

THE Tucson is a well-equipped and capable alternative to the likes of the Toyota RAV4 and Land Rover Freelander. Even if residuals don’t quite hold their own against the mainstream opposition, the price advantage could still make the Tucson an attractive proposition.