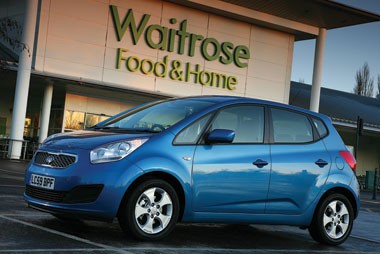 The words ‘Kia’ and ‘fleet’ aren’t often said in the same sentence, but the Korean brand wants to change that.

Its latest supermini MPV – the Venga – is worth considering alongside the more fleet focused Ceed.

The latter is most likely to appeal as it offers the green credentials so important to fleets today.

It emits just 117g/km of CO2, meaning lower taxation, and has an official mpg figure of 62.8 thanks to its six-speed manual gearbox and EcoDynamics technology with a stop-start system.

On the road the Venga’s steering is light and it executes a three-point turn with ease.

Visibility is another plus with an absence of chunky A pillars.

The build quality confirms the brand’s determination to shake off its ‘cheap and cheerful’ image.

The Venga has been designed by the man behind the Audi TT, Peter Schreyer. It has already picked up a product design award.

One of the Venga’s main selling points is its spacious interior with its long wheelbase providing plenty of legroom. There is also a two-tier boot.

Drivers can choose from three trim levels with plenty of safety features as standard including six airbags and Electronic Stability Control.