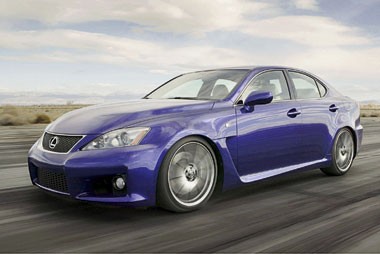 But for its latest model, the first in the company’s new F performance range, Lexus has turned to the dark side and created a car to more than rival Audi’s RS4 or BMW’s M3 extreme machines.

With its 10-spoke alloy wheels, twin-tiered exhausts and aggressive stance, the IS F looks particularly sinister in black and great in white.

The cabin is a mix of the usual leather and aluminium garnished with a sort of mock carbon-fibre that’s shiny silver and a matter of taste, but it’s what under the bonnet that matters.

But because Lexus is still about effortless luxury the IS F comes with a clever eight-speed automatic transmission that starts in first gear using a torque converter for smoothness and then “locks up”, so that it feels like a manual and allows near-instant changes using paddles on the steering wheel or the gear selector.

The changes are smooth in Drive or near-racecar-hard in Sport mode. From rest, the IS F feels quicker than an M3 even though the two companies quote identical 0-62mph times.

I’ve driven a road-going German Touring (DTM) race car and the Lexus feels similar but with all the noise, vibration and harshness removed and all the luxury kit put in.

From about 3,600rpm – thanks to a specially-fitted airbox under the bonnet – the IS F even sounds like a DTM car.

Carbon dioxide emissions of 270g/km put the IS F into the highest road tax band even though it is 25g/km lower than BMW’s 4.0-litre V8 engine.

In traffic you only ever need a few seconds of acceleration – and the gorgeous accompanying sound track – to reach any cruising speed you think of.

Even pushing on, the IS F feels more confidence inspiring and chuckable than the last M3 I drove, though the ride is lumpy by luxury car standards.

On a race track in Spain, the car was so stable in a straight line you needed a knack to get it turned into corners quickly so that you could get back on the power sooner.

Driving hard on the circuit the IS F felt stronger in acceleration than an RS4 and the brakes much superior to those on an M3.

The most driver-focused Lexus ever and refreshingly off message. With only 150 for sale in the UK this year, get your order in quickly.