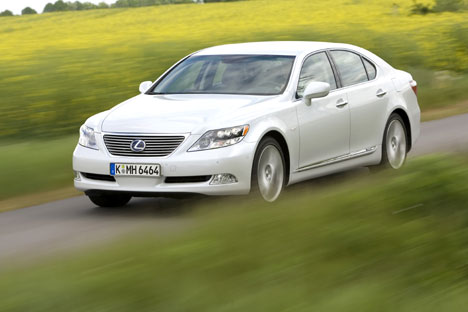 Becoming an accepted member of the luxury saloon clique is as hard a task as getting into some of the gentlemen’s clubs the owners of those sorts of cars frequent.

In truth, Mercedes-Benz has had the market sewn up for years with its S-Class, although at the cheaper end the Jaguar XJ competes, while the Audi A8 and BMW 7 Series have made some headway, but generally in the smaller diesel models.

But when it comes to splashing serious 90 grand-type cash, the default choice is the big Merc.

All that might be about to change though, because Lexus’ new LS600h is hugely expensive – especially for a Lexus – but has arrived at a time where its hybrid, four-wheel drive powertrain is hitting the spot for fat cats wanting to go on an eco-diet.

Starting at £81,400, and reaching £87,999 (before options) for the long wheelbase, rear aircraft seat version, the LS600h is more expensive than any Lexus before, but early indications suggest buy-ers are going for the full package.

Around 80% have gone for the high-spec long wheelbase while half of those are opting for the two very comfortable, luxurious seats that stretch themselves out electrically. The numbers are still only in the low hundreds, but it’s the shifting of a trend.

So what’s the attraction? It has to be the 5.0-litre V8 hybrid powertrain, because the rest of the car is perfectly lovely but no better than the other wonderful cars at this price.

What hybrid power brings here is the sign you are doing your corporate bit for the environment (albeit while surrounded by some of the finest cow hide on the planet) and a marked improvement in emissions and fuel economy: 219g/km of CO2 and 30mpg are silly numbers for a car of this size with 436bhp.

That means massive saving in BIK tax should it be the owner’s own company car (only £720 a month compared to £933 for a similarly powered and more expensive S600L). But with most cars being the long wheelbase version, its going to be a car that’s driven by chauffeurs.

So for those cosseted in the back what’s life like? Well, with the big aircraft reclining seats, it’s pretty wonderful actually.

Sit on the passenger side of the car and you can press a button and make the seat in front curl itself into the footwell, giving you a full repose. Then there’s massaging, but not just your usual dull old rollers.

No, the LS600h does a full shiatsu job which is far too relaxing if you’re trying to do some work. There’s also a buzzy vibrate setting too. Naughty.

The ride quality is decent, if a little bit below the S-Class’s high standard, but the engine is near-silent.

James in the front tells me that it drives as you would expect: plenty of grip from the four-wheel drive, light steering and surprising acceleration.

I can see why top executives are spending their money on this car.

It might not have the splendour of an S-Class, but it tunes in perfectly with the eco-friendly mood of the moment while retaining the necessary luxury.