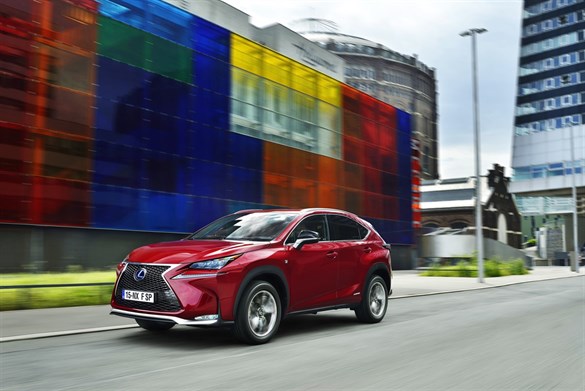 Lexus is undergoing unprecedented growth in the UK in 2014. Registrations were up 26% for the year to date including August, no doubt helped by a revised compact CT hatchback, as well as the first full year of the new IS saloon.

It bodes well for 2015, with a new coupe in the pipeline to rival the BMW 4 Series and Audi A5 – both popular with user choosers.

This takes Lexus into a new sector, squaring up against four-cylinder diesel versions of cars such as the BMW X3, Audi Q5, Volvo XC60 and the Range Rover Evoque.

With first deliveries expected this month, registrations will be dominated by the petrol-electric hybrid NX 300h. Although an NX 2.0T will be launched in spring 2015 it is only for those who really don’t want to save money on fuel.

The crossover and SUV sector is the fastest growing in Europe, and while Lexus already has the large RX 450h, the NX is expected to attract some new customers to the brand.

It certainly stands out as Lexus is striving for more emotive styling. The IS saloon was perhaps the first to illustrate this, but the NX exaggerated the angles and lines further still. There’s no way this car could be mistaken for something else.

Pricing is aggressive when specification is taken into account. All models will come with LED headlamps, a reversing camera, adaptive cruise control with pre-crash safety and a space-saver spare wheel as standard. However, don’t expect all the boxes to be ticked. Nav doesn’t appear as standard unless you go for the top Premier model, and both S and SE have cloth seats.

Like other Lexus models where the entry-level grade is targeting class-leading CO2, the front-wheel drive only S grade can’t be used for towing because the extra chassis strengthening required for fitting a tow-bar isn’t as important to the company as low emissions. The IS 300h and GS 300h in entry-level grade are unable to tow for the same reason.

But Lexus says the S will only make up 10% of NX sales in the UK, with most choosing all-wheel drive SE grade and higher (Luxury, F-Sport and Premier). CO2 emissions for those models start at 121g/km, which is lower than any four-wheel drive diesel rival.

The NX 300h feels like a high-quality product. Our F-Sport test car had a beautifully finished interior, the dashboard centre that cascades from display screen, to vents to ventilation controls then leading down to audio and the centre console is also neat and distinctive.

Standard on F-Sport and Pemier (optional on Luxury),  is a wireless phone charging dock.

Anyone familiar with Lexus hybrids will know what to expect: exceptional refinement on the move, composed behavior, but very slightly inert responses from the steering.

Comfort and space in the NX are good. The sports front seats in the F-Sport keep occupants in secure even when troubling the car’s limits of grip. As the battery pack is under the rear seats, there is no compromise in interior space or luggage capacity.