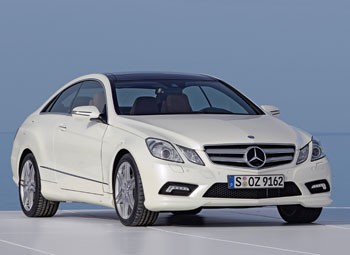 Taking over from the considerably more effete-looking CLK, the E-Class Coupé takes Mercedes-Benz’s offering up a notch, witnessed by its E designation and design cues, rather than references to the smaller C-Class that the old car had.

As a result, it feels more like a cut-price CL or airier CLS.

Mercedes-Benz expects that at least 40% of all the Coupés sold will go to fleets, although in reality that figure will be much higher once small fleets and business money purchases are taken into consideration.

Quite how many will be sold is open to guesses in these days of liquidity ambiguity.

Last year, Mercedes-Benz managed to register just over 2,000 CLKs, while the newer and cheaper BMW 3 Series Coupé and Audi A5 racked up 11,000 and 7,800 units respectively.

As a new model launched in more straitened financial times with overall UK sales set to drop to around 1.6 million units this year, the E-Class Coupé might well double last year’s figures but not much more, which would be a respectable performance and will mean that residual values are very strong in three years’ time (CAP puts the E350 CDI SE at 46%).

And that should make it a very attractive car to lease, aided by the fact that Mercedes-Benz in the UK has been as aggressive with the price as the German designers have been with the looks.

On-the-road prices start at £33,282 for the models that go on sale initially in June, the cheapest being the 350 CDI BlueEfficiency SE diesel, as well as 350 CGI BlueEfficiency and E500 V8.

They will be joined in August by 250 CDI and 250 CGI four-cylinder turboed models, which will be of particular interest to fleets because of low emissions.

In all, average prices for the Coupé have been reduced by around 5% – making the cars cheaper than in most other markets – while specs have been increased, with the confusing Avantgarde, Elegance and Sport lines dropped in the UK in favour of a more obvious SE and Sport format so they compare easily with the competition.

So why the special dispensation in the UK?

“The UK is such a strong market for coupés compared to the rest of Europe that we are able to structure pricing that is much more competitive, because it is justified with the return in volume we will get,” he says.

The interior of the E-Class Coupé is beautifully done and reeks of quality, although the rear seats still don’t offer a great deal in the way of comfort.

The driver has a massive steering wheel to cling on to.

It seems a little incongruous with the car’s sporting pretensions, which are only realised when in sports mode, with the suspension tautened to maximum attack.

Even then, it still feels like a big, wide car, which is no bad thing.